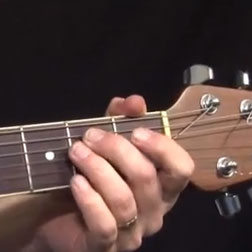 Legato is a term that you will hear a lot once you start getting into lead guitar playing, but what exactly does it mean? The literal meaning of legato is ‘tied together’ but in musical terms it means that you should play the notes in a smooth manner, not leaving any space between one note and the next. The opposite of ‘staccato’, whereby the notes are played abruptly and percussively, legato gives a smooth, flowing sound to the music.

On every instrument this is achieved in different ways. Take a wind instrument such as a flute. To produce legato here the player would play all the notes under one breath. With a bowed stringed instrument, the player would play the notes under a continuous bow. On the guitar legato is achieved by minimizing (or doing away with altogether) picking. This means using ‘hammer-ons’ and ‘pull-offs’, and when talking about guitar technique this is precisely what is meant by legato.

First of all we’ll look at playing hammer-ons. Hammer-ons are used to go from one note to a higher note on the same string without picking the new note. You can use a pick to play the very first note, but the subsequent notes will be played by ‘hammering-on’ to the string with your fretting fingers. So let’s say you are playing a C on the G string
at the 5th fret with your index finger, and you then want to play a D on the same string. What you do is bring the tip of your third finger down, fast and hard, on to the string at the seventh fret to produce the note. You need to come down on the string perpendicular to the fretboard, and with enough force to produce the same volume, more or less, that you would with a pick. That pretty much covers it for hammer ons.

If you want to go down to lower notes on a string you will need to use pull-offs. A common misconception is that a pull-off is just the opposite motion to a hammer-on, but it’s slightly more complicated than that. If all you do is take your finger off the string you won’t actually produce any sound, or if you do it will be very quiet. Instead you really need to ‘pluck’ the string with the finger that you’re pulling off with. So for example, if you play the note F# with your third finger on the seventh fret of the B string, and you then want to play the note E on the fifth fret of the same string, you firstly need to make sure that your first finger is already fretting that note on the fifth fret.  Then you have to remove your third finger from the seventh fret in a ‘plucking’ motion, down towards the floor, so that the note on the fifth fret is now heard.  If your pull-off action doesn’t cause the string to vibrate enough then the volume will not be adequate, but if you pull too hard on the string before releasing it you may bend the note sharp which won’t sound good.You need to experiment a bit with this until you find the sweet spot.

So that’s the two main techniques involved in playing legato on the guitar, but there are a couple more worth mentioning. One of these is very similar to the standard ‘hammer-on’ but it doesn’t require that you pick a note first.

This technique, known as’ hammering on from nowhere’ enables you to play entirely with one hand, eliminating picking completely. Instead of picking the first note on a new string you simply hammer on with the fretting hand. It can be quite difficult to get the hang of – you need to be very careful with muting, and make sure your hammer-ons are accurate and powerful – but once you have it down you can play melodic lines exclusively with one hand, which not only gives a much smoother sound, but also looks pretty cool as well.

One other technique you can use for legato playing is ‘tapping’. This takes the idea of hammer-ons and pull-offs and applies them to the picking hand as well. Basically you use the fingers of the right hand to do hammer-ons and pull-offs, to play notes that you couldn’t reach with just one hand, enabling you to play lots more notes on a single string, or to reach wider intervals for fast arpeggio playing, which gives a smoother sound than sweep-picking.

Now that you understand the basic idea of playing legato let’s look at how to practice it. Let’s begin by taking the concept to its simplest form – using hammer-ons and pull-off between two notes. Alternating rapidly between two notes like this is called a trill, however to begin with we will be doing this very slowly. Play any note with your first finger fretting it, then use your second finger to ‘hammer-on’ to the next fret. Try to ensure that the notes are played cleanly, and with even volume. Now pull off back to the first finger, again paying close attention evenness and clarity of the note. Carry on alternating from one note to the other, starting off very slowly. The idea with this is to make sure all the notes sound clear and have even volume, and to start building up endurance in your fingers.You should use a metronome when doing this exercise to make sure you are playing in time, and try to do it continuously for five minutes or so.

After you’ve got to grips with this exercise you should do the same with all the other fingering possibilities. You have used your first and second fingers so far, so now do the same exercise with your first and third fingers.Using your first finger, fret any note you like then, with your third finger, hammer-on to a note two frets higher. Trill between these two notes for at least five minutes. After that, try it with your first and fourth fingers. Then use your second and third fingers, then second and fourth, and lastly you third and fourth. Some of these fingers combinations will be easier than others – most people struggle the most with those involving the pinky – so pay more attention to these.

Once you have become proficient at playing trills you can progress onto playing patterns with three notes.  Keeping one finger per fret you should experiment with finger patterns using fingers 1 2 4, 1 3 4, and the stretch fingering 1 2 (or 3) 4 with a fret in between each finger (for example first finger on the fifth fret, second on the seventh, and fourth on the ninth). Patterns you can try include 1-4-2-4, 4-1-2-4-2-1, and 1-2-1-4. Play these using all the fingerings looked at above, and try them on one string, as well over two or more strings. Try moving up and down the fretboard as you play them. After you’ve gotten to grips with these, you are ready to start using the patterns within the context of diatonic scales, applying them to the three note per string scale shapes. This is where they turn from unmusical exercises into usable musical ideas.

By now I hope you get the idea of this. Continuing on from here you can apply the same concepts to more complicated scale fragments, with four notes, five notes, six, seven etc. Mix patterns together, try skipping strings. Get your right hand involved in some tapping. The possibilities are endless, so have fun with it.

Before I finish this article I want to look at some of the more common technical problems that people have when they first try this. The main issue is that of finger strength and endurance. In order to play legato, especially for extended periods of time requires a lot of endurance and strength – not things that you can develop in a short space of time. You
need to develop this over time. Regular practice will help you here. Progress will come with time, and you’ll find it much less demanding on your fingers. Legato playing can also be quite rough on your fingertips – more so than normal picking. Again, there’s nothing much you can do about this, just keep practicing and your fingers will toughen up and it will no longer be an issue.

When practicing legato I always recommend using a fairy clean amp setting. Using lots of distortion will hide your mistakes and make it harder for you to discern whether your dynamics are even or not. When you use a clean sound you can hear much more clearly how even you playing is, and this should always be your primary objective. Having said that, I’d also recommend that every now and again you crank up the distortion just to check you’re not creating lots of unwanted noise, or letting strings ring out when they shouldn’t be, so keep an eye on your muting technique when doing this.

As with all practice you should start off slowly. Over time the strength in your fingers will improve, and then you can start increasing the speed at which you practice, but your main concern should always be accuracy. Don’t focus too much on playing fast – it will come easy once you have the finger strength and the accuracy. Some fingers will be naturally weaker than others, so you should focus more time on these, till you can play equally well with all fingers.

So, we’ve reached the end of this article on legato playing.  I hope it has shown you what you can get out of learning this style of playing, and how it can benefit you as a guitarist. I also hope that I’ve given you some ideas about how to learn, practice, and apply this technique, so get practicing and start incorporating legato into your own playing.

This article was written by Chris Lake, a professional guitarist and guitar teacher of over 25 years. If you would like more help with all aspects of learning the guitar may I suggest you head over to Chris’s website where you can get a free copy of his latest eBook about playing the guitar – The-Guitar-Guide.com