Don’t assume you know anything about ‘recorded’ guitar tone based on what sounds good ‘at home’ in your living room.

Last month I found myself back in the studio for the first time in nearly 3 years. I had been planning my own Blues project for a long time now, (at least in my head) and somehow it all suddenly seemed to come together very quickly. 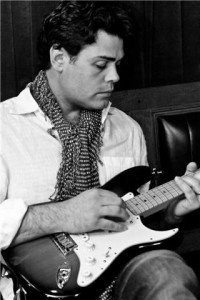 We arrived at the studio around 10am and began to unload the gear, I had my recently acquired Two Rock amp with me, it’s matching 2×12 and my trusty ES335. The mood was relaxed and as the guys in the band are all seasoned pros I knew it was going to be a good, easy going session.

We hooked up the gear, got a sound and went for our first take. At this stage it is worth noting what way we actually decided to record. Drums were in a soundproof room with a window leading into another soundproof room where Andy the other guitar player was, headphones on, trusty Telecaster strapped ready for battle. John, the bass player and Frankie the engineer, were in the control room. The whole band recorded live except for my guitar and vocal parts. For this, I laid down a ‘scratch’ track with the view to going back after lunch and overdubbing my vocals and guitar.

It couldn’t have gone any better. A couple of the tracks were first takes and we were all wrapped up with the rhythm tracks by lunchtime. With the rest of the afternoon to cut overdubs and vocals for 4 tracks I was relaxed and optimistic I could finish before 6 and keep within my pre-set studio cost budget.

“Kid I can’t wait to hear this Two Rock, I hear they’re cracking amps…” Frankie enthused as I began hooking up the prized head and my modest pedal board.

“Frankie wait to you hear this thing” I exclaimed. “You’re gonna love it. The reverb is to die for…”

“Oh I bet it is Nev, but don’t forget we’re recording completely dry. I’ll take care of all the reverb in post production, it’s a lot easier to control that way, I never, ever record with reverb…”

My heart sank a little. I love reverb. I wouldn’t say I’m a ‘reverb junkie’ but I do love it – most players do. It adds color, space and size to your tone and, lets face it – your confidence. I knew only too well that the key to a good performance is being happy with your sound. I reached over shut off the reverb and flipped the stand-by.

The live guitar room in Einstein Studios is fully enclosed and soundproofed. It is, in the pursuit of the ultimate recording environment ‘dead as yesterday’ and ‘dry as a bone’. I grabbed my guitar and hit a couple of licks…ugh. What a tone! Or lack of tone. My guitar had never sounded this bad, ‘boomy’, ‘middy’ and within the confined recording room ‘choked’.

I grabbed the headphones and with one eye on the studio clock called out to Frankie through the mike to run a take. As he cued up the track my heart began to beat a little heavier than usual, beads of sweat started appearing on my forehead and my fingers felt like jelly. I was about to experience performance anxiety, or as studio players call it ‘red light syndrome’.

I’ve played guitar for 23 years. I’ve been in the studio many times with different bands over that time and never had I felt like this. The guitar felt alien, detached, and suddenly my mind went blank as I truly struggled with my guitar tone and as a direct result my playing.

I got to the end of the first take and I could hear from the tone Frankie’s voice through the cans he wasn’t digging it.

“That was OK, but I think we’ll go again. Can you turn the Mids and the Bass down on that Two Rock. It’s not sounding great in here…”

I reached over and rolled back the Mids and Bass – way off from where I would normally have them in the comfort of my home. I played a few notes…  it sounded even worse. Next thing I knew the track was cued up for another take and away I went again. This time I fluffed a couple of licks and stopped while the track was put back to the start.

An hour into overdubs and I hadn’t got anything worthwhile down on tape. Meanwhile I’m still staring at the clock, as that feeling of running out of studio time and having nothing in the bag got stronger and stronger. Next thing I heard Frankie’s voice through the cans. “Nev I know that Two Rock is supposed to be a great amp and all but for some reason today it’s not working for you. Why don’t you try one of my amps?”

As we all know guitar players are a fickle bunch and we like things ‘our way’ especially when it comes to gear. Suddenly an amp that you’ve agonized over purchasing for months is being cast aside and you’re being asked to play something that you’ve never even heard of before let alone spent any time with.

“Why don’t you try this?” Frankie said calmly pulling out a Diezel Einstein head from under the rack of guitars. “I know Diezel is known as a Metal amp but you’d be surprised at the tone you can get from this, and I know it records really well…”

At this stage I was ready for anything, I needed help and this was a guy who had 30 plus years of recording experience. I was going to listen to him.

He hooked it up, adjusted the tone controls and I hit a few licks. It was much better than the tone I was struggling with before.

“A lot of guys don’t perform well with headphones on. Why don’t you come into the control room and listen back to the takes on the speakers? You may get a better feel that way. You can also hear a little of the lexicon reverb I’ll be adding in the post production.”

I got up, walked into the control room, sat down and cut the remaining four tracks in a shorter period of time than I had spent fumbling around with the wrong tone on the first track. On an amp I had never played before, set up and EQ’d by someone else, and it sounded… amazing. I listened to the playbacks and I could not have been any happier.

I learned a huge lesson that day about being in the studio:

1. Don’t assume you know anything about ‘recorded’ guitar tone based on what sounds good ‘at home’ in your living room.

2. Always remember that a good sound engineer is there to help you get the most out of your performance and may offer recording techniques and suggestions that are completely alien to what you consider ‘best practice’ for getting ‘your’ tone.

3. Be prepared to be ‘out of your comfort zone’. Recording in a dry room is not pleasant if you’re used to a ‘live’ sound and the support of effects like your amps spring reverb. The control we had during mixing regarding adding the ‘right’ amount of reverb was astounding. It was at this stage I became a true believer in adding effects ‘post production’.

4. Relax. Getting stressed doesn’t help. Looking at the clock doesn’t help. Get comfortable, take a deep breath and focus on laying down the best take you can possibly do.

In the end I couldn’t be happier with the way the whole session turned out. I will be returning to the studio to cut more tracks in the coming months and I will be sticking to the same recorded guitar tone we achieved on that first day. It was a completely unorthodox way for me to get a ‘my’ tone (whatever that is) but it worked ‘on the day’, in that studio and was right for what we needed. It wasn’t that the Two Rock was a bad amp, but part of the sound that attracted me to it in the first place was the reverb. Once that was gone it was a different animal… I now totally ‘get’ why amps like the Fender Tweed Deluxe and the Champ are such great recording amps; no reverb, simple tone stack and low wattage.

Why the Diezel worked for me I’ll never know. In the end I trusted an engineer who was familiar with it and knew how to record it. That was all that mattered. I wasn’t going to tempt fate by asking too many questions.

You can read more from Neville at his site: http://www.learntoplaytheguitaronline.co.uk/