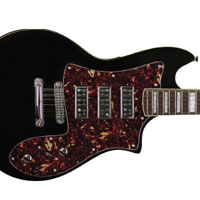 The first time this writer heard the chime and jangle of Roger McGuinn’s Rickenbacker 12 string on “Mr. Tambourine Man,” the hair stood up on the back of my neck. I became an unabashed fan of 12 string electric guitars, and remain so to this day. The success of the Rick 12 motivated all the major guitar makers of the day (Fender, Vox, Gibson, Guild, etc) to release their own versions, some of which became good sellers in their own right. The popularity of 12 strings rose and fell with the folk/rock fad, and by 1968, most 12 strings were out of production, with the exception of Rickenbacker.

What comes around goes around, and 12 string electrics are enjoying new popularity, thanks to players like Tom Petty, Mike Campbell and Johnny Marr, plus a host of Nashville session musicians, who employ those jangly sounds on current country music offerings.

Hanson Guitars of Chicago is now marketing an electric 12 string, dubbed the Ravenswood 12. Of Asian manufacture, the Ravenswood features the graceful, ‘60’s-inspired lines of their Gatto and Cigno models, and is a solid mahogany and set neck design, featuring a rosewood fretboard, 24.75 scale, a highly functional 12-saddle Tune-O-Matic bridge and Stop tailpiece, and a compact slotted headstock that will allow the player to fit the guitar into a standard sized gig bag or hardshell case. Two types of tuners adorn the guitar; vintage-style “Butterbean” tuners are affixed to the sides, while Schaller-type tuners are attached to the back. Neck width is 1-11/16” at the nut, providing comfortable and ample string spacing. A frequent complaint among Rickenbacker devotees concerns the narrowness of the neck, but that’s not a problem with the Ravenswood. The neck itself is a medium-sized C shape, not as pencil-thin as the current Fender “Modern C” shape, but not as thick as a ‘50’s Gibson either. I would prefer a thicker neck on the Ravenswood, but that’s just my preference. The neck is certainly highly playable, with medium-sized vintage frets. It should be noted that the first four pairs of strings feature the heavier ones on the outside, just like Rickenbacker’s setup.

The pickups are visually styled along the lines of vintage DeArmond Dynasonics, as featured on vintage and current Gretsch electrics, and contain 44 gauge wire coated with heavy Formvar, and wound to a healthy 7.5K Ohms on the neck pickup, and 7.K on the bridge. They effectively reproduce the jangle and chime of those great ’60’s records many of us grew up with. A 5-way selector switch provides the following settings; bridge alone, bridge and middle, bridge and neck, middle and neck, and neck alone. Strat players in particular will find this setup familiar. The Ravenswood features one volume and one tone control with knurled Telecaster-like knobs.

Looking the guitar over upon receipt, I was impressed with the obvious quality of the fit and finish. The Gibson-style cherry stain was flawless and very attractive. The Ravenswood is also available in solid black. There were no obvious marks or imperfections on the guitar. Zero complaints! So, how does the Ravenswood stand up to gigging situations?

I took it on two gigs and played it through my Sommatone Slick 18 amp, which occupies a tonal area somewhere between a Fender and a Marshall, and generally favors warm and midrange tones. Breakup starts at around 2 1/2, so it’s not overly clean. For straight rhythm playing, I found the neck and bridge position full and lush, and the bridge and middle position equally as effective. For Byrds jangle and chime, as expected, the bridge pickup alone was the winner, when coupled with my Janglebox JB-1 compressor, which is designed to recreate the Byrds/Beatles 12 string sound. Less effective was the neck pickup alone, which sounded a bit wooly. Ravenswood pickups may have just bit less natural high end than Rickenbacker’s “toaster” pickups, but that’s not a negative. It’s just different. With the right settings, there’s jangle and chime aplenty here.

In terms of playability, the Ravenswood performed beautifully and stayed in tune for the most part. The exception was on a particularly humid day gig where I experienced tuning issues on all my guitars, so weather appeared to be the culprit. The Ravenswood is comfortably light and well balanced with no neck dive. It’s simply a great sounding instrument that’s a pleasure to play. I allowed a close friend to try it on a couple of his gigs in order to get a second opinion, and he came away equally impressed.

Hanson Guitars has a winner with the Ravenswood 12 string. The suggested list price is $975.00 with hardshell case. It can be ordered directly from Hanson, or through their growing network of dealers. Visit www.hansonguitars.com for more information.