CLICK HERE To Get 4 Complete Guitar Courses For $4
Home
7 Songs. 4

“Crazy Little Thing Called Love took me five or ten minutes. I did that on the guitar, which I can’t play for nuts, and in one way it was quite a good thing because I was restricted, knowing only a few chords. It’s a good discipline because I simply had to write within a small framework. I couldn’t work through too many chords and because of that restriction I wrote a good song, I think.” Freddie Mercury

A bit of Background

Peter Hince, the head of Queen’s road crew, recalled to Mojo magazine September 2009: “The idea for the song came to him while he was in the bath. He emerged, wrapped in a towel, I handed him the guitar and he worked out the chords there and then. Fred had this knack of knowing a great pop song.” And this is something we at Guitar Coach Magazine all agree on.

It was written by Mercury as a tribute to Elvis Presley and the entire song was reportedly recorded in less than half an hour – although we would imagine a few hours was nearer the mark. Having written “Crazy Little Thing Called Love” on guitar and played an acoustic rhythm guitar on the record, for the first time ever Mercury played guitar in concerts, such as at Live Aid at Wembley Stadium, London in 1985. In fact it sounds more Elvis than Queen but the track was quickly embraced and adored by their fans.

It is a track that features on their 1980 album The Game, and also appears on the band’s compilation album, Greatest Hits in 1981. The song peaked at number two in the UK Singles Chart in 1979, and became the group’s first number-one single on the Billboard Hot 100 in the US in 1980,[4] remaining there for four consecutive weeks. It topped the Australian ARIA Charts for seven weeks.

This brilliant but easy to master song has everything a beginner guitarist needs – open chords, simple barre chords and a couple of lead guitar bits that break up the different segments of the song. So a bit of everything for everybody.

With any song you are endeavouring to learn, make sure you become familiar with the structure and, as well as the original. Listen to other versions, including any live ones performed by Queen… there are loads out there.

The key element to mastering this is to keep nice easy feel to strumming pattern to help reduce any stress whilst changing chords; this will keep you relaxed and you will find your body will start naturally moving to the cool lilt of the song. This will chill you even more, help you really get into the tune and quickly improve your confidence and enjoyment during the learning process.

As usual with our Easy Guitar Songs, we have included the full structure of the song and shown where the chords change in line with the lyrics. Oh, and, of course, the chord diagrams to give you a fighting chance.

The rhythm guitar pattern is generally uniform throughout, so this allows you to experiment with different ways to emphasise the up and down strokes so you can put your own mark on it. This is really important as it will stop you becoming a robotic copying machine with no character to your playing – although your aim should be to still play it correctly!

When playing the barre chords, it is not always easy, especially on an acoustic, to play the full chord, so Andy will show you a way to minimise the blisters on your fingers by only playing the lower strings of the Bb and C chords. This will not only help you when learning other songs, but also allow you to play other chords barre chords with this (A) shape. 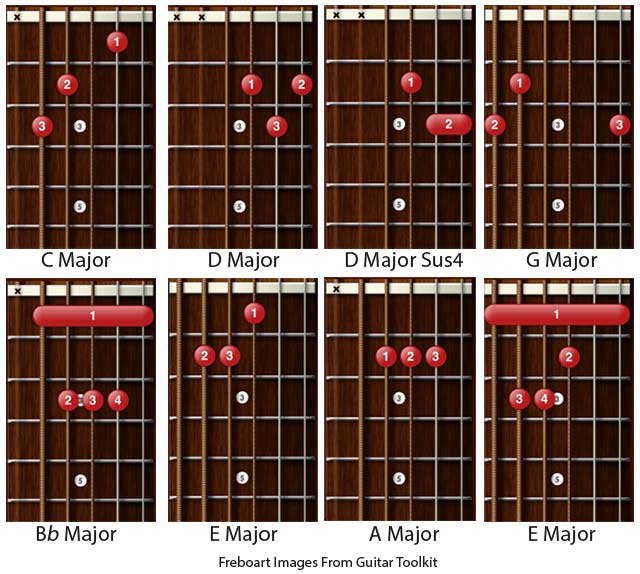 Are you ready for more? Check out these 3 FREE guitar packages… 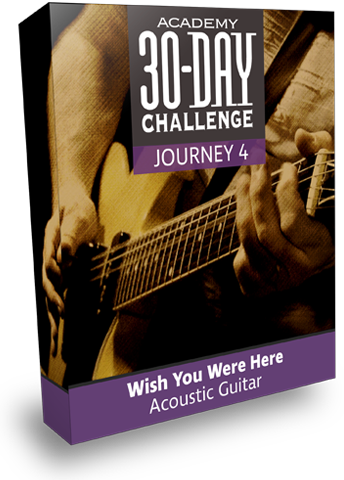 As a well respected player, teacher and coach, Andy Partridge is the lead instructor within the Guitar Coach Academy.

Andy’s gentle step by step approach and detailed note by note lessons, will give you the confidence, reassurance and motivation you need, to really achieve your guitar playing goals sooner than you thought possible.

His relaxed and engaging teaching style (complete with sometimes questionable jokes) make learning easier, faster, and so much more fun.

Starting today, you can remove the overwhelm and confusion of too many videos from too many different teachers, that just don’t fit your learning style… And just focus your time and effort to get the best results, fast!