If you're looking for fresh ideas and inspiration to progress your guitar playing further and faster, then you're in the right place.

You can quickly and easily earn new songs and develop new skills with these 18 Individual Courses and Lesson Libraries. There's over 65 Hours of detailed step by step training all instantly accessible within the Guitar Coach Academy.

...we have structured courses that cover the entire journey from complete beginner to intermediate level player.  So no matter where you are on this journey, you can either take a step back and refresh your skills, or push ahead to new challenges. This course will take you on a fun and fulfilling musical journey, from complete beginner to a capable and confident guitarist.

Each of the 6 Week Guitar courses have been designed as a complete and comprehensive structured system, to provide you with a clear pathway to achieving your guitar goals easier and faster than ever.

With each volume you’ll be learning more essential guitar skills and techniques, while also building your own collection of songs that you can play for friends and family, or simply for yourself. This 6-Week Course follows directly on from 6-Week Guitar Volume 1 to increase your guitar knowledge, develop your rhythm and strumming, and expand your skills and techniques. This is a highly structured 30-day journey to build your skills rhythm and timing using backing tracks.

In Journey 1 we'll be learning Stuck In The Middle With You. This is a great song to practice and develop your strumming patterns.

This is for guitarists who know some open chords and can strum, but really want to take it up a level and learn how to play complete songs, develop their rhythm and timings skills and have some fun.

During your 30-Day Challenge we’ll be making sure you get the right foundations in place for not only learning a great song, but also how to approach learning any song. Master these easy guitar songs in minutes! Play songs by The Eagles, The Beatles, The Kinks, David Bowie, America, Van Morrison and many more. Each song listed below is complete, with detailed videos, tab, chord charts, and song structures. This is for guitarist who play either electric or acoustic guitar and who are comfortable playing a range of open chords and barre chords, and want to focus on developing rhythm and timing skills and play with greater confidence.

During your 30-Day Challenge we’ll be working on playing a song but with an understanding of how you might play with others, possibly even in a band dynamic. You’ll be learning more advanced techniques and skills, to enhance your playing and to have more fun! Master this all-time classic from Pink Floyd; Wish You Were Here.

During your 30-Day Challenge we’ll be making sure you get the right foundations in place for not only learning a great song, but also how to approach mixing in some lead guitar and improvisation when playing any song. This is an eclectic collection of song riffs and intros which sound great on acoustic guitar. They've been chosen to add some variety and fun to your playing and practice sessions.

Each riff is short and easy to learn. Ideal when you've got a spare 15 minutes and want to learn something new and fun!

This is not only a great way to practice, but each riff will give you something new to learn, build your skills and increase your accuracy and playing confidence.

Our integrated courses and lesson libraries will totally remove the guesswork of what to learn next and give you a step by step plan to follow.

...the Academy provides the structure and support to progress your skills in either soloing or songs, from beginner level through to intermediate level. Discover the secrets of soloing and improvisation, as you effortlessly learn to master the fretboard.

This is a complete course on creating and improvising solos using the Eminor Pentatonic scale, in all 5 positions over the fretboard.

And if you want to uncover the mystery of effortlessly navigating your way around the fretboard… and you want to have fun and learn how to express yourself through your playing… then this Easy Soloing course will really get you there.

This entire course is based around the E Minor Pentatonic scale, which as you probably know, is the most popular and often used scale in lead guitar.

But this is course is not all about just playing the notes in that scale. It’s actually about building your own toolkit of licks in the different positions of the scale, to build your fretboard knowledge. Experience the fun of creating and improvising some really cool Blues solos...almost instantly!

With Easy Blues you’ll experience for yourself just how easy it is to have fun, and get creative with your playing, even if you’re at a relatively beginner level.

This step by step course will make your playing more individual and expressive, as you discover how to translate your ideas onto the fretboard.

This course has been specifically designed for you, if you’re relatively new to playing lead guitar, or you just loving playing Blues. Or if you want to learn how to get more creative in expressing yourself, through Blues improvisation. This is for guitarists who already play some guitar, but want to get into playing lead and learning how to improvise solos.

During your 30-Day Challenge we’ll be focusing on the E Minor Pentatonic Scale and developing your lead skills and techniques.

You'll be learning some great licks and developing your own too, as we build our practice sessions around that all-time blues classic Roadhouse Blues.

You’ll also be building your fretboard knowledge so that you can quickly start creating your own improvised solos. This is an eclectic collection of song riffs and intros which sound great on electric guitar. They've been chosen to add some variety and fun to your playing and practice sessions.

Each riff is short and easy to learn. Ideal when you've got a spare 15 minutes and want to learn something new and fun!

This is not only a great way to practice, but each riff will give you something new to learn, build your skills and increase your accuracy and playing confidence. Effortlessly ramp up your playing speed, fluidity and accuracy, without having to spend hours and hours on boring, repetitive drills.

This program is all about training your fingers to work instinctively and intuitively, on an almost subconscious level.

Inside this program, there’s 42 detailed video training sessions for you, which cram in every skill and trick in the book, into structured warm up and practice sessions.

You’ll learn different scales, and in different positions on the fretboard. You’ll develop your finger dexterity, alternate picking, speed picking, and your rhythm and timing.

And the really fun thing is, you can combine any number of the 42 sessions, in any order, and create hundreds of individual Workout routines. 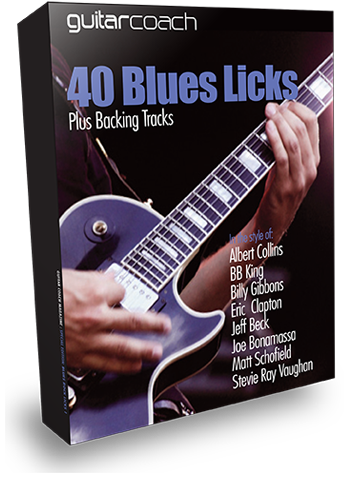 Master the guitar sound, playing style and signature licks of the Blues masters. This detailed step by step training will allow you to easily recreate the authentic sound of these Blues greats: With 3 Teaching Videos for each Guitar Riff, there’s a total of 42 multi-camera videos in this collection, plus full Tab and Backing Tracks... And it’s all downloadable, so you don’t need to be online to really have some fun! Learn and master more Classic Guitar Riffs quickly and easily. There’s a total of 42 multi-camera videos in this collection, plus full Tab and Backing Tracks Learn and master even MORE Classic Guitar Riffs quickly and easily. There’s a total of 42 multi-camera videos in this collection, plus full Tab and Backing Tracks We've takend apart the playing sound and style of these guitar greats and will show you how to recreate the authentic sounds using a small selection of effects, plus learn Signature Licks so you can really sound like these guitar legends. If you've ever wanted to know what it feels like to play in a band, then this is for you!

In the Bandjammer Library there's 31 great songs performed by Andy and his band, including:

Back In The USSR: The Beatles

Come As You Are: Nirvana

Come Up And See Me: Cockney Rebel

Don’t Look Back In Anger: Oasis

I Fought The Law: The Clash

Pinball Wizzard: The Who

She Moves In Her Own Way: The Kooks

Somebody Put Something In My Drink: The Ramones

Start Me Up: The Rolling Stones

You Really Got Me: The Kinks

You can then chose to learn the lead guitar or the rhythm guitar part, or both! Each section of the song is broken down for you in great detail. There's also the full song structure, chord charts and tab.

Once you've practiced a little with just the bass guitarists and the drummer, you can take your place in the band and enjoy a full jam session!

This is so much fun and allows you to experience what it's like playing in a full band.

Our integrated courses and lesson libraries will totally remove the guesswork of what to learn next and give you a step by step route map to follow.

Choose your plan below and let's get started!

Full 90-days access to all 18 Courses for a single one-off cost. No ongoing payments.

Then $19.95 per month ongoing membership

Full 365-days access to all 18 Courses for a single one-off cost. No ongoing payments.