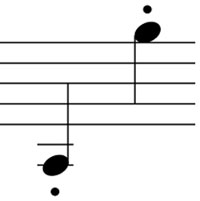 Normally when it comes to speed this is often associated with the actual tempo at which you play. One often over-looked aspect however can be the space between notes. If you aren’t able to change between notes fast enough your playing will sound like it’s in bits. The term for this when done deliberately is staccato, indicated with a dot directly above or below a note…

The above problem, particularly for beginners, can be more common at the bottom of the fret-board on the lower strings, most likely due to a combination of thicker strings that are also further to stretch around for the fingers to reach, and the frets being further apart.

Let’s look at a riff. Start playing it slowly, concentrating on changing between each note quickly and accurately. The plucking hand should be synchronized as though both hands are working as one. Use alternate picking.

A couple of riffs similarly located on the fret-board to practise would be within Deep Purples’ “Smoke on the Water” song; the guitar riff that plays over the part of the chorus where the lyrics go: “The fires in the sky”. Another is the starting guitar riff in “Crazy Train” by Black Sabbath.

If you had problems before, notice how after practising these riffs slowly and getting the changes between the notes fast and accurate, that they should flow a bit easier and therefore sound better when you play them faster.

Sometimes changing how you perceive something can make it easier. For example when practising sweep picked arpeggios, at first, it can be beneficial to see the actual notes as just what you do in the gap between what you are really concentrating on, which is the change between each. That is largely what makes a sweep picked arpeggio when played fast. Below is an example to try (E minor 7th)…

So when practising anything slowly, wherever you are on the fret-board, don’t forget to consider the changes between the notes, getting them as fast and clean as possible with the plucking hand and fretting hand synchronized. This is as much an underlying important part of guitar technique as anything else.

Article by Gareth Evans. Read more from Gareth on his website:  Intuition Publications