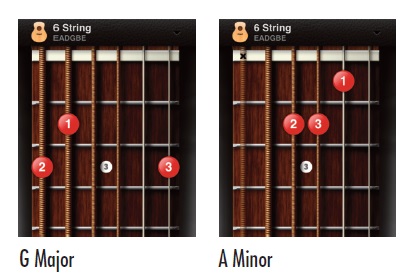 Many people learn guitar because they want to sing songs or accompany someone else singing. To do this you don’t have to read music nor a huge amount of technique.

Beginner Guitar Chords. Commit some chord shapes to memory and then practise changing between them. The fretting hand has to change quick enough to not lag behind the tempo of the song. The melody can’t wait for several beats for the right supporting guitar chord! In addition, the strumming hand has to get used to holding a pick (soft ones are good for rhythm guitar, especially on acoustic) and evenly brushing the strings down and up.

Next are the moveable shapes, i.e. chords without an open string. Some of these require a barre or half-barre where more than one string is held down by the first finger. These take a bit of practise, since they need a combination of good finger position plus strength. This is where the quality of your guitar will make a difference. A guitar with a low action and/or light guage strings will be easy to play barre chords on than one with a high action and/or heavier strings.

With this information you can play any major or minor chord in more than position. Most people pick up other shapes (open and barre) as they learn songs.

Rikky Rooksby is the author of Backbeat’s series for songwriters which comprises the best-selling How to Write Songs on Guitar, Inside Classic Rock Tracks, Riffs, The Songwriting Sourcebook, Chord Master, Melody, How to Write Songs on Keyboards, Lyrics, Arranging Songs and How to Write Songs in Altered Guitar Tunings. Visit his webpage at  http://rikkyrooksby.com/  and hear his music on www.soundcloud.com