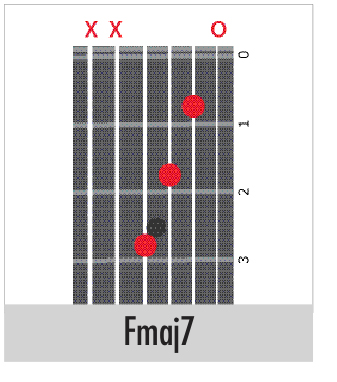 These articles will develop your chord knowledge and also give you chance to gradually increase the number of chords you can play. This will, in turn, widen the repertoire of songs you will be able to master. So let’s have a look at the chord of Fmaj7 and the notes that make up this chord.

Here is the chord chart:

As you can see, the notes you will be playing/strumming (starting from the high E string) are; Top E String – Open (E) B String – Second Fret (C) G String – Third fret (A) D String – Third fret (F) A string – Generally muted or not played Bottom E String – Generally muted or not played If you study the chord shape, you will note that the top 4 strings (E,B,G and D) make up the majority of the F major chord but with the first finger removed from the top E string, so the note on this string drops by a semitone or one step.

The purists amongst us will not strum the A and Bottom E strings because the root note is F, which is the note on the D string (3rd fret). Generally, the root note should be the 1st string you strike when executing a downward strum. However, in this instance, the open A and open bottom E strings are still notes that make up part of the chord, so strumming them is not an inexcusable error.

However, leading the downward strum with the bottom E note does not make it sound like the F maj7 chord should sound. My suggestion on the best way to strum the chord is to omit striking the bottom E string altogether or, alternatively, mute it with your thumb so it does not “ring out.” You can also do the same with the A string but, as striking it is not the end of the world (i.e. it does not take as much away from the sound of the chord as strumming the open bottom E) it may be best to only “try” and not strum the open A string. If you do, it won’t matter too much.

Let’s face it, when you are playing live you don’t want to concentrate too much on perfection! Enjoy the experience and have fun. In general terms, major chords are happy chords and minor chords are sad sounding chords. I like Fmaj7 because it’s a halfway house between the two, so you can relate it to whatever mood you are in at the time – especially whilst song writing.