The Sound & Style Of Angus Young 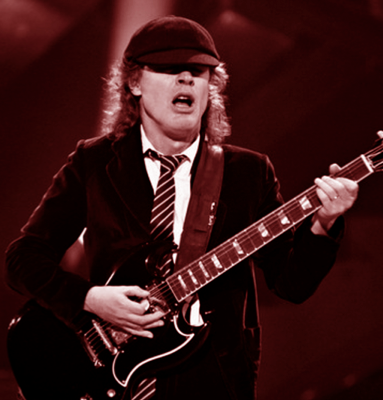 Angus Young is one half of the perhaps the most prolific riff-writing duo this side of Jimmy Page.

Armed with his schoolboy out fit and Gibson SG he is instantly recognisable whoever you are and he played with such venom it was as convincing as you’ll ever get. Young played like a?man possessed attacking the guitar and playing his phrases like it was his last move on earth; that was key, because even if they were cliche blues licks no-one played them quite like Angus Young.

Setup was simple; Young would put an SG straight into a 100w Marshall stack. Everything he did was via the guitar control but 9.99 times out of 10 he would be playing balls to the wall,wide open every time. For a little more output he would dig in on the strings hard which would hit the valves in the amp harder and, likewise, to back off he would switch to fingers or jet simply play softer. Another key aspect to point out is that while his sound may hint at quite a bit of gain, it is actually quite dialled back. Just goes to show how hard Mr Young played.

Playing In The Style Of Angus