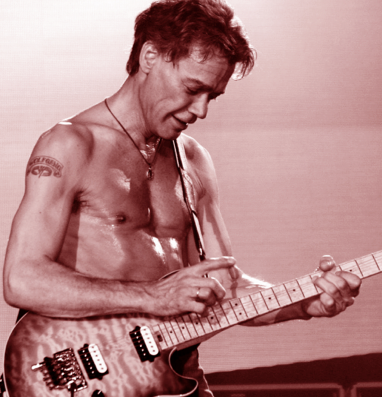 EVH turned rock guitar on it’s head when he burst onto the scene in 1979.

Eddie brought two-handed tapping to the fore and every guitar player in the early 80’s wanted to know exactly how he was doing it; at first he?turned his back to the audience when
executing the technique, but it was soon to become­­ a staple of Van Halen’s live performances.

More importantly Eddie played with a smile on his face making everything look effortless, and?he?was one of the first users of the Floyd Rose tremolo system-divebombs and squeals galore!
EVH built his own guitars in the beginning which have now culminated in his own Wolfgang signature series with Fender; but in the beginning it was stray-style guitars with a hum bucking pickup in the bridge position and those familiar stripes. Eddie’s signal chain consisted of a wah-wah pedal-which he modified-a phaser pedal and a flanger. All those familiar riffs such as a ‘Panama’ and ‘Unchained’ were recorded with these boxes. From there it was into a non-master volume Marshall head; 100w of pure, unadulterated, cranked british goodness!

It was due to EVH’s desire to drive these amps into singing overdrive by using either a hotplate (a device used to allow the cranking of valve heads at a more accessible volume) or winding the volume/gain up to ear-splitting volumes. So, to avoid clearing a hole in the front 5 rows of a show, Amp companies started making amps with master volumes… so you could argue that Mr Van Halen invented the master-volume amp.

Let’s go and grab our favourite spandex and mullet as we go and recreate some signature EVH sounds… WOW!