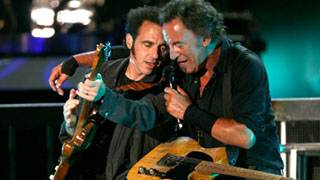 Guitarist Nils Lofgren, usually thought of as an ace sideman for Neil Young and Bruce Springsteen (he’s currently on tour with The Boss and the newly-expanded 18-piece E Street Band), as well as a successful solo artist in his own right, has been offering online guitar lessons from his website, www.nilslofgren.com, for nearly five years. We asked Nils how he got started on guitar and how his Guitar School developed.

“I started on accordion and took ten years of classical lessons, but switched to guitar and took lessons for a few months and had some great teachers. It was actually my brother, Tom Lofgren, who got me started with an old beat-up guitar at home. So, I’ve been playing and studying music, literally since I was five. Over the last four decades, people have been coming up to me constantly, telling me they’d like to play rock guitar for fun but weren’t allowed to, because, “I have no talent, I have no rhythm.”

“I said, ‘Who told you that?’ And they never know, but they think that. So, I decided to put together one hour lessons and offer them on my website, because I wasn’t going to give lessons in my home. I have a Beginner’s School starting at zero, for people who think they have no talent or rhythm. You don’t need to know anything. All you need is a guitar and a way to tune it, and I’ll teach you to enjoy playing guitar.

“In the Beginners’ School, there are five lessons that are built around the blues scale, and I get deep into it with the acoustic and electric guitar.

“Then, there’s an intermediate school that’s a little more advanced for people that know a bit and want to take some more sophisticated lessons. All the lessons are an hour long, which might take you eight months or eight days, depending on how crazy you are. When you’re ready for more information, you go to the next one. Once it’s in your computer, it’s yours for life.

“One of the problems that’s very frustrating is that guitar is like gymnastics for the hands. Everything is moving in a way it’s not used to. I’ve counselled people saying, ‘Here’s something you can do with one finger that takes no talent or rhythm, and I’ll back you up on a blues. They can make music immediately. Do that now with me and make music and focus on that part of it. The point of my Beginner’s School is, ‘Play music with me and feel what it’s like to make music right now, today.”

Lofgren well understands how difficult learning guitar can be for the average person.

“It’s not a fancy three-camera shoot; just me in my studio, sometimes with my dog, showing you what I do. Sometimes, when I need a close-up, I’ll just walk right into the camera.

“I’m very excited about this, because I’m still learning every day, even while on the road with Bruce and The E Street Band. I’m still applying what I’ve learned over the years. The whole idea, especially with the Beginner’s School, is to get people enjoying it before adding the frustrating practice stuff. The goal is to have guitar playing be a therapeutic healing hobby. It’s not a race; don’t give up on something because you can’t play it right away. The beautiful thing I learned from accordion lessons was, if you can’t do it immediately, don’t throw it away. Chip away at it slowly.” 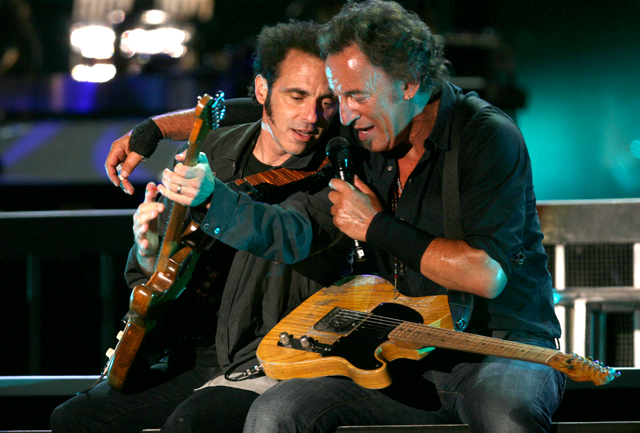 “I think it was on The Rising tour. Bruce always plays a long solo in ‘Because The Night.’ One night, we were doing the song, and it came time for Bruce’s solo, and he just pointed at me, as if to say, ‘Go!,’ so clicked on my fuzz and did a solo almost three minutes long. It was unexpected, but that’s Bruce for you. Sure enough, over the next forty shows, Bruce played the solo every night! Now, years later, I’m playing the solo on that song every night.

“Lately, I’ve come up with a solo for it that incorporates a harmonic minor scale that’s dark and modal, which is a sound I love. One of my problems is, I have short, thick fingers, not beautiful long hands and fingers like Jimi Hendrix. Playing that minor solo has been very hard for me, because I can’t come close to playing it at the tempo of the song.

But, I haven’t given up on the idea of doing it. A lot of times, after two or three weeks, I’ll make a decision, as my own teacher, ‘You’re never going to be able to do it at that speed.’ OK, then we’ll let it go, or we’ll change it. I’ve learned to let it percolate and give it a bit of time.

You should never beat yourself up about not being able to play something right away. I give myself permission to take it slow to start. All guitar players-all musicians-have physical limitations.

Old School Nils’ latest recording is titled Old School, and he considers it one of his best works. He recorded it in his home studio with guest artists like vocalists Paul Rodgers and Lou Gramm from Foreigner.

“We had the great Sam Moore from Sam & Dave come in to sing. Standing in the studio and singing with him face to face was a real honor. “I turned sixty when I was recording, and there’s a song on the record called, “Sixty Is The New Eighteen.”

I wanted the album for be an accurate representation of what’s like to be sixty today, with the stigmas this crazy planet attaches to age.”

The new album, Old School, covers a variety of topics including desperation, self-doubt, true love, departed friends, holding on to your dreams and the world gone mad… along with a tribute to the late, great Ray Charles.

“Old School has many different types of songs and feels… some rough, bluesy tracks to haunting acoustic songs,” continues Lofgren. “There’s some interesting and controversial characters in these songs and I look forward to everyone’s reaction.” The album is available directly from his web site

Part 2 Of this Interview will be online soon. Subscribe to Guitar Coach magazine and we’ll email you once it’s live!