In the last issue we promised to bring you an unusual melodic chord – but we have failed to deliver due to a deluge of e mails asking us to demonstrate a diminished chord and explain why they exist! A good point well made.

It comprises the notes Bb, E and C#

Diminished chords, in general, are not particularly melodic or, indeed, inspiring to play or listen to as they seem to lack something and tend to be very dissonant. It could be the thin sound, the fact that it always feels like it needs to change and, perhaps, be somewhere else. For that reason they are used as transitional chords, most commonly between two chords a tone apart. For example, if you take our Bbdim you could use the following chord sequences, where you only play the diminished chord for one or two beats i.e. it becomes a passing or transitional chord.

I think I understand what it’s all about

Now you have an idea how they function, it should all start making sense. Like we alluded to above, play the Bbdim chord in isolation and you could well sound as though you were a beginner making up your own unpleasant, unharmonic chord. However, when used in the right chord context, chord sequence and timing, or maybe under the lyric line as a question or surprise context, Mr. Diminished could well become your friend and you will suddenly find yourself experimenting with this and other diminished chords. It is also an excellent tool to have up your sleeve if you are into writing songs.

As well as being a common tool for jazz and blues guitarists, diminished chords are frequently used in orchestrated film scores to create a brief moment of tension or surprise. Although not widely used, here are a couple of more mainstream songs that utilise the Bb dim chord.

So you can really appreciate and feel the diminished chord, call these songs up on YouTube and jam along.

As a practice, form other diminished chords by simply moving the positions shown at the beginning of this article up and down the neck accordingly. You will then be able to have a stab at songs like I Do, by Paul McCartney. Here are some parts that use the diminished chord: 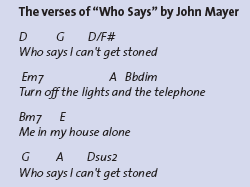 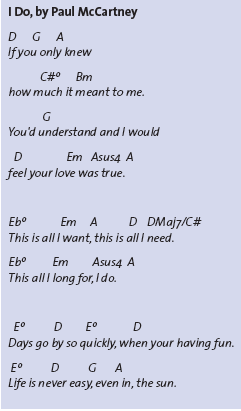 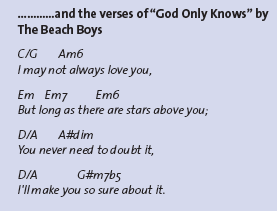 I hope this has given you an insight (without the theory) into diminished chords, but if you have a craving for any more knowledge, just drop us an e mail.