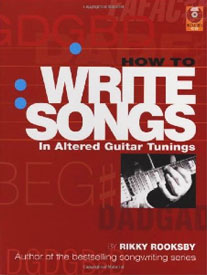 Rikky Rooksby talks about the opportunities a little re-tuning can offer songwriters.

Think of songs such as Led Zeppelin ‘Kashmir’, The Rolling Stones ‘Honky Tonk Women’, Joni Mitchell ‘Big Yellow Taxi’, Bad Company ‘Can’t Get Enough’, Stephen Stills ‘Love The One You’re With’, The Beatles ‘Dear Prudence’, Coldplay ‘Yellow’, Nick Drake ‘River Man’, Bob Dylan ‘Mr Tambourine Man’, Neil Young ‘Cinnamon Girl’, and Crosby Stills Nash and Young ‘Suite: Judy Blue Eyes’. What do these songs have in common? All were composed and inspired by a guitar that was not in standard tuning.

Altered tunings are now an accepted method for creating great new guitar music. Up to the 60s they were largely the province of folk and blues guitarists, but the spread of musical influences from folk protest songs and electric blues into chart pop and counter-culture rock in that decade took them into the musical mainstream. By the end of the 60s headliners such as Bob Dylan, The Who, The Rolling Stones, Joni Mitchell, CSN&Y were writing and recording songs with them.

When Richie Havens walked out on stage at the Woodstock Festival, on August 15 1969, to face a quarter of a million people, he did so – amazingly – with a guitar in altered tuning. Since those days, altered tunings have been utilized by acoustic and electric players alike in many popular genres such as folk, college radio rock, indie, hard rock, grunge, New Age guitar and many more.

It is true that thousands of great songs have been written by guitarists in standard tuning. As a tuning, EADGBE is an excellent, musical compromise that provides readily playable chords for most keys and chord types. In some keys – notably C, G, D and A, and their relative minors A minor, E minor, B minor and F# minor – enough of the basic chord shapes have open strings to produce a pleasingly resonant sound for little physical effort. In addition, it is easier to have a key change in a song written in EADGBE.

However, going beyond the familiarity of standard tuning opens some exciting musical doors. Songwriters can find much inspiration in altered tunings. This is chiefly because perhaps the majority of songwriters who compose on guitar do so by finding emotionally-charged chord changes. Altered tunings provide these by the bucket-load.

An altered tuning defamiliarises the fretboard. With the turn of a peg or two it removes – either partially or completely – the standard shapes and patterns which a songwriter can find through habit and which, at times, fail to inspire through being over-familiar. An altered tuning has the potential to make commonplace chord sequences exciting again because they sound different when voiced in new shapes. It can also offer a songwriter the chance to broaden the harmony of his or her songs through bringing in other chord types in effective shapes. Even the simplicity of an open major tuning, where a single finger barre creates a major chord, makes simple major changes sound new.

For a songwriter, fiddling with the tuning is as much about the generating of inspiration through defamiliarization as it is about the altered tuning even being audible in the final song. The objection, ‘But you could have done that in standard tuning’ can be countered with, ‘Yes, I could have but I didn’t until the idea came to me. And it didn’t appear until I re-tuned the guitar’.
If you have only played in EADGBE retuning the guitar and finding familiar shapes no longer work can be daunting. An easy method for dipping your toe in the waters of altered tuning is the single-string change. Re-tuning a single string can be enough to ‘refresh’ ordinary chords and the sound of the guitar. Try ‘drop D’, where string 6 is detuned by a tone from E to D, or ‘top drop D’ where string 1 goes down by a tone.

For a songwriter’s in-depth study of altered tunings (complete with a selective chord dictionary) see my book How To Write Songs in Altered Guitar Tuning. 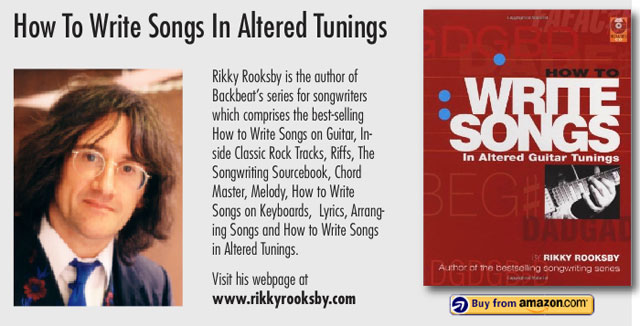