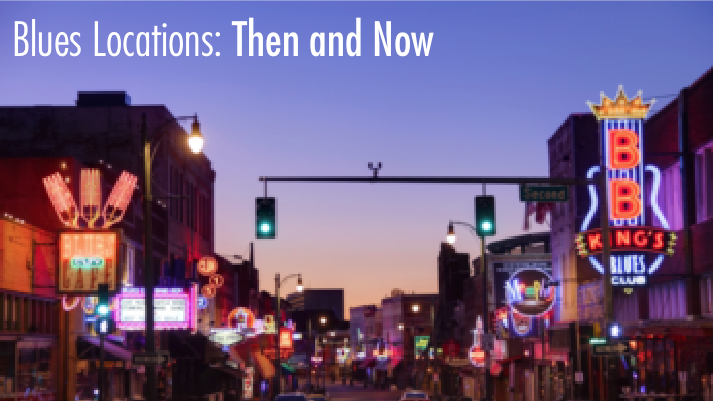 For this month’s Blues edition of Guitar Coach Magazine we decided to take a look at some of the famous locations and cities that birthed the Blues, and what music they’re famous for now.

– Let’s start with Tennessee. Memphis goes hand in hand with the Blues, from the very first Blues sheet music. “The Memphis Blues” was written down by W.C. Handy in 1912 and it has been the cradle for all blues music since. Some icons include B.B King and the entire call list of Sun Records. Today it is widely known as the birthplace of Justin Timberlake.

– Became the birth place of the modern day electric blues from 1948. Now it is the driving force behind America’s heavy metal scene.

Montreux Jazz Festival started in 1967 for the likes of Ella Fitzgerald. Gary Moore, Eric Clapton and Deep Purple, who wrote “Smoke On The Water” there in 1971. Now it plays host to Queens of the Stone Age and even Wyclef Jean in 2009.

– New York Blues was a type of blues music heavily influenced by jazz. It made New York a centre for folk rock music from the likes of Bob Dylan, new wave punk from the Ramones and the Velvet Underground.

– Played host to a huge Big Band scene in the 1940’s, have since spawned Nirvana and Death Cab for Cutie.

– The U.K. first got to know Blues as a result of records being brought in through the dockyards and trade ships. Hitting it’s peak in the 1960’s and 70’s with the likes of the Rolling Stones, Led Zeppelin and Eric Clapton. It’s good to see the genre is alive and well today with acts such as Seasick Steve and the Jim Jones Revue.

– With a strong blues scene in the 40’s and 50’s led by the bars and clubs of Hastings Street, it spawned the influence on R’n’B which led to Motown Records. Today, Detroit’s son Jack White brings blues into the 21st Century with his bands the White Stripes and the Raconteurs.

–  L.A. had a thriving blues community in the 30’s and 40’s. It has since exploded into a variety of genres, influenced by film, punk, metal and hip hop. Los Angeles has produced a fine array of bands ranging from The Doors, Red Hot Chili Peppers, Guns ‘n’ Roses and Sublime – to name but a few.