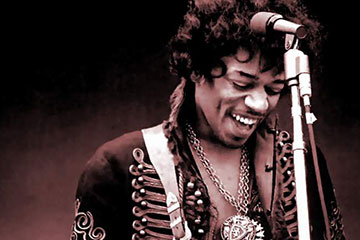 Jimi Hendrix is essential education for all guitarists and he played in a time before guitar pedals, before proper amplification even. Pre-Hendrix distortion wasn’t even a thing. His four year career redefined the whole culture of guitar playing and how society saw and heard the guitar.

Zak Wylde described it as like watching a black-and-white movie, “Jimi came out and it was like the ‘Wizard of Oz’ ” he says.

Originally called the Jimi Hendrix Electric Guitar Festival, the tribute started as a one-off gig for an all-star band that headlined Seattle’s Bumbershoot Arts & Music Festival in 1995. Over the years, the tribute expended to a full-on national tour featuring a number of contemporary guitar icons, including Kenny Wayne Shepherd and Joe Satriani, along with older artists — like Buddy Guy and Hubert Sumlin — who influenced Hendrix own playing. It has also included Hendrix’ friends and bandmates Mitch Mitchell and Billy Cox (both of whom played in Hendrix’ band The Experience), Buddy Miles, Carlos Santana and the Door’s Robbie Krieger.

For the tribute Wylde was joined by Jonny Lang, Chris Layton (a founding member of Double Trouble with Stevie Ray Vaughan), the Black Crowe’s Rich Robinson and others. The full list of performers can be seen at experiencehendrixtour.com.

Each artist performed their favourites from the Hendrix catalogue and collaborate with the rest of the artists on stage. Wylde has been playing “Manic Depression” and “Purple Haze.” Keep a look out for the next tour – surely one not to be missed.