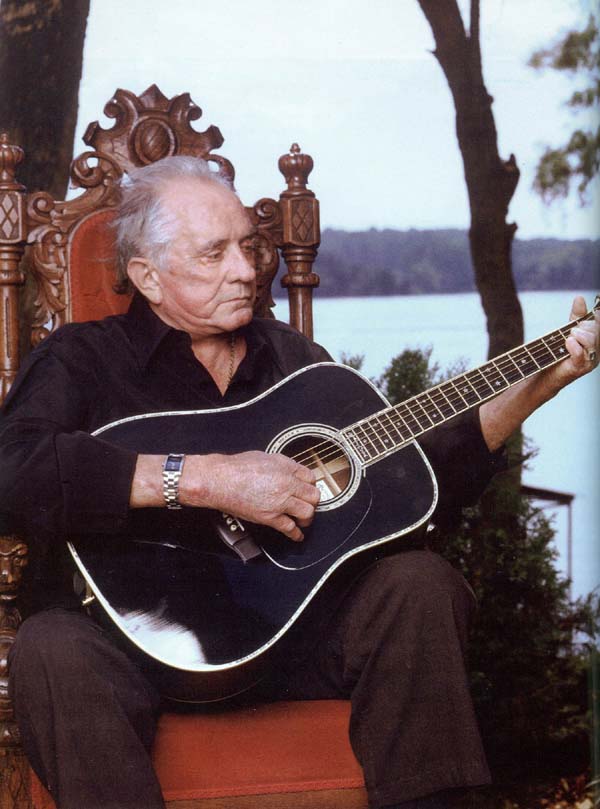 Acoustic guitars have been a part of the landscape of rock, country, and popular music since before the terms were invented. Standing head and shoulders above other brands in the market like Gibson and Takamine are the incomparable instruments of Martin and Co. Martin guitars. They are at the top of the table among professional guitarists, both for the warmth and power of their sound and the sense of feel and expression that comes from the quality of their construction. Anyone who has invested in one of their models knows that they have bought a guitar for life, and if you’re thinking about doing the same, you’ll be in very good company.

Though he started off playing Gibson acoustics in his early career, Johnny Cash switched to Martin guitars during the late fifties and early nineteen sixties, playing them for the recording of his monumental live albums at Folsom Prison and San Quentin. Johnny’s strummed Martin with his boom-chicka-boom rhythm style, along with lead guitarist Luther Perkins picked lines, became his trademark. Over three decades later, he was still using his trusty Martins to create his “American” albums with producer Rick Rubin. By this time, the Martin Company had created the limited edition “Johnny Cash” D-35 in his honor, and its classic tone can be heard all over the Cash versions of Solitary Man and I Won’t Back Down.

It’s virtually impossible to pin Bob Dylan down to one particular genre or brand of anything, whether it be songs, style, or opinions. One of the few constants throughout his career, however, has been his choice of acoustic guitar. Today, he is perhaps most famous for switching from acoustic folk to electric rock way back in 1965, but what most people forget, or are simply unaware of, is that Dylan actually started playing electric first and then switched to acoustic guitar before moving to New York, where his career took off. The guitar at his side when he rolled into the city for the first time was a 1949 Martin 00-17, which would probably be virtually priceless were it to be put up for sale by the Seattle museum where it now sits. Through the early and middle sixties Dylan alternated between Martin and Gibson acoustics, before he settled decisively for Martin, using a 00-21 for his masterpiece, Blood on the Tracks in 1974.

The acoustic guitar made what amounted to a rebirth in the early nineties after being left somewhat by the wayside throughout the nineteen eighties. Part of the reason for this renewal of interest was due to MTV, which started its “Unplugged” series in 1989, featuring artists who ordinarily performed with full electric ensembles and large stage shows. It’s hard now to adequately describe the effect that hearing stripped back versions of rock anthems had at the time. For most viewers, it was a revelation. The most successful of the resulting shows was Eric Clapton’s set, largely made up of blues standards and originals like Running on Faith and Layla. Clapton played a 000-49 Martin for the event and its cutting sound gives the otherwise laid back vibe a real edge. The emotion that Clapton wrings from it on Tears in Heaven has to be heard to be believed.

Following Clapton’s success, many other bands tried their hand at the unplugged format, with varying degrees of success. For most of them, the problem was that without the tricks and special effects that they were used to using to embellish their songs, the acoustic format left no room to hide. One of the few to rise to the challenge, surprisingly to many at the time, was Kurt Cobain and Nirvana. Making use of some covers (most notably David Bowie’s The Man Who Sold the World), but relying in the main on their own songs, Nirvana were incendiary, and the show and resulting album won them a massive new audience, with the added bonus of not alienating their existing fanbase. For the show, lead singer and guitarist Kurt Cobain played a restrung Martin D-18E with custom pick-ups and added volume and tone knobs. Nirvana were known as a band who liked to subvert the rules, and for the acoustic show, Cobain used a cheeky Boss distortion pedal for some of his solos such as on The Man Who Sold the World.

With the current fashion for all things acoustic, it’s probably no surprise that Martin guitars are still popular in a big way. Marcus Mumford plays Martins pretty much exclusively, with no less than two D-28’s in his arsenal. Wesley Schultz of the Lumineers also uses a Martin 00-18 for songs like Ho Hey, while Ed Sheeran’s loyalty to the company has been rewarded with his own signature model and a page on their website.

Article by Dennis Fraser of bestacousticguitarguide.com