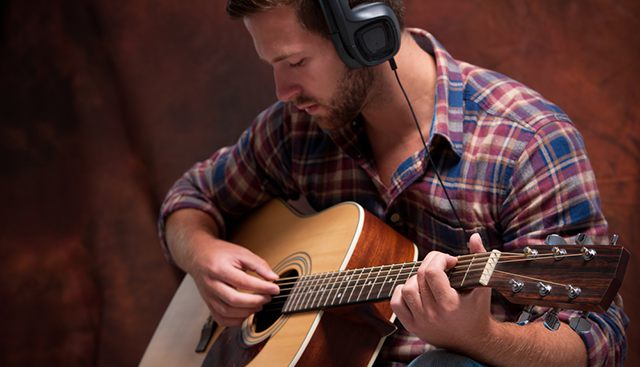 The Benefits of Practicing Guitar with Backing Tracks

The process of learning guitar has tremendously transformed in the last couple of years. In the 90s we had the famous audio tapes and VHS instructional materials. Anyone who was learning how to play the guitar back then knows how hard it was. Even though some like to state that those who were learning to play back then have a better “music ear” due to the fact that they had to transcribe everything on their own, that is only a myth and there are really no benefits in comparison to today’s self-learning environment, fuelled through the use of internet.

Usually when we are practicing a riff, lick, mini solo or a certain technique on the guitar, at one point we start to see the benefit of practicing that specific bit in terms of time. When we say “time”, we’re referring to playing in tempo and correctly in sync with the beat. If we are just doodling on the instrument, than we might be in position to learn the specific thing that we are practicing, but what is most likely going to happen is that we are not going to be able to play it in time, as we’ll be following an imaginary beat and groove in our head, which at beginning stage is often not developed enough.

Of course, some of us might have a great sense of time that comes naturally, but most of us will need to work on it and practice hard. This is why we should practice playing along with a metronome or some other tool that helps us play in the context of time and beat.

The Metronome – Introduction and Explanation

Metronome is the most basic tool that we can use to practice our time keeping skills. Metronome has been used by musicians for centuries and we can get a hardware version of it for cheap in any music store, or just turn on a metronome software on the computer or a mobile phone (also there are lots of websites that provide an online metronome app).

We can set a tempo on the metronome and just let it “beep”. Playing along with the metronome click forces us to think more about our playing in terms of time. If we have never used a metronome before, we suddenly freeze and get scared as we don’t feel comfortable in terms of when to pick a certain note in order to have it in sync with the metronome. “When” we play a note is as important as “which” notes we play. “When” defines if we are playing in time, and each note can have a certain note duration that we need to be aware of. This note duration defines for how long a note should be sounded. Should it last for a beat, two beats or a full bar? In the end, all of it must fit in the metronome beat, a beat that is constantly true and spot on.

What is problematic when playing with a metronome constantly is that over time we get so good at it, that our playing might start to sound a bit robotic. Also, there is really no musical context rather there’s just a steady, vicious beep that is never wrong. We listen to our playing against this constant beep. It is boring! Yes, it gets boring – fast. What is our worst enemy when practicing guitar? Getting bored, and losing excitement or inspiration to play.

Backing tracks were available even back in the days of instructional audio cassettes. We would blast a cassette on our stereo and play over the backing. What has internet brought us in recent years is a boom of backing tracks availability. Every instructional website today has tons of backing tracks that are supplied with the audio and/or video lessons. Then again, there is YouTube. Tons and tons of cool sounding backing tracks can be found there. Backing tracks for all sorts of instruments and genres, with the ones for guitar being the most popular ones. The backing track is an audio recording containing a full song, with a certain instrument omitted from the track. When backings are made for guitar players, we would usually have a full band track with drums, keyboards, bass and other instruments – without the guitar. So we can just plug-in and jam along!

Practicing guitar in a context is extremely important. We should always strive towards practicing in the musical context because after all, we are hoping to learn how to play music not sound like an exercise.

When we are practicing with a backing track, we still have the same base that provides us with a time reference (just like metronome does), but there are also other instruments in there. By practicing this way, we start to really listen to the drums, concentrate on the hi-hat, snare and kick drum. Then there is a bass and/or piano. We learn to listen this way! Listening is really important and practicing with backing tracks helps us develop this important skill.

Practicing along with a backing track gives us the same vibe and feeling as if we are playing with a real band. This means that if, and when we get a chance to play with other people, we are prepared and can easily fit in as we are already used to playing in this kind of environment (at least virtually). Finally, practicing with backing tracks is a lot of fun! When practicing, we need to make sure that we are having fun, as that will help us keep going. Hours go so fast when we are having fun with the inspiring backings, while playing with a metronome can feel like a chore. Backing tracks help us develop our musicality and we start getting a hang of different song structures, as everything we play over a backing track needs to fit a certain musical context.

Next time you are thinking of practicing a certain technique, riff or lick – instead of firing up the good ol’ metronome, look for a suitable backing track online instead. Find the one that fits the mood. Then adapt the exercise you were planning to play, and try to make it fit over the backing. Not only will you have a lot of fun and stay inspired this way, but you’ll also put more hours into your practice routine, and you’ll make more progress on the instrument. Have fun and don’t be scared to utilize the power of backing tracks. Look for the ones that sound cool to you, and then just jam along. Also don’t worry if your playing over the backing track doesn’t sound so cool at first, the more you do it – the better you’ll become at it!

Stefan is playing guitar for more than 9 years. He is passionate about helping people find the right gear and is also co-founder of www.GuitarFella.com.