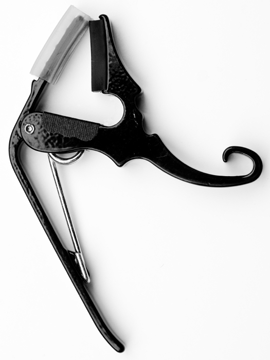 How To Use A Guitar Capo

Think of Paul Weller’s ‘Wild Wood’,  Oasis’ ‘Wonderwall’ and Travis’ ‘Why Does It Always Rain On Me’ … you’ll never get any of them to sound right on guitar without one of these. Rikky Rooksby explains.

The capo is a fabulous gadget. To use it properly is to love it. No batteries, no re-charging, no mains, and it fits in your pocket. The capo is a handy device which every guitarist should have. It’s your very own fifth finger and no key will ever scare you again! For the guitarist a capodastro (or ‘capo’ for short) is a very flexible friend, and more user-friendly than that other flexible ‘friend’ … your credit card. It helps you play in difficult keys and will make sure your rendition of many songs is right on the money. The name comes from the Italian ‘capo tasto’, ‘capo’ meaning head, ‘tasto’ meaning tie, fret, or key.

Capos Down The Ages (or at least since Elvis)

A capo reduces the number of barre chords in a song. It can also increase the playability of a guitar by lowering the action a little. If the string tension is tight, try tuning a semi-tone below concert pitch and put a capo at the first fret, or even tune a tone down with the capo at the second fret. Also, once the capo reaches the sixth or seventh fret the guitar sounds different, because of the loss of low bass notes and the addition of more high notes. Pete Townshend said, “‘Drowned’ [from The Who’s Quadrophenia] is in the key of C. I use a capo on my guitar at the 5th fret then I play the song in the ‘G’ shape, it gives a nice ring to the chords.’ You can even make new chord shapes that involve stretches impossible lower down the neck.

If you work with another guitarist, or multi-track guitar parts, a capo can be employed to double a chord sequence in different positions, so the two guitars play contrasting shapes on each chord. This gives a fuller musical texture and can even approximate a 12-string even if you don’t have one. If a chord sequence in A major in open position is also played as if in C major with a capo at the ninth fret, the overall span of sound is richer.

Putting it on right

Capos come in many designs, and since the 1970s capo design has improved greatly. Capos are less bulky and more reliable than they once were. Check out the very elegant designs of the G7 Capo Company. Putting a capo on a guitar often causes the need to re-tune. This is because, for the capo to not muffle the strings, it must exert pressure. This pressure may cause the thicker strings to go slightly sharp. The heavier the guage of strings the more noticeable this is. To get a clean sound and better intonation, the capo needs to be placed close to the fret, but not too close, otherwise the capo interferes with the fingering of chords and notes on the first adjacent fret. If the capo is placed away from the fret to give your hand more room to move it can increase the amount of tuning problem,. Capo positioning means ensuring the capo is aligned vertically, so the strings are not pulled up or down from their usual position.

Why capos are not cheating

Playing an instrument is about making music. Technique and technology serve that end. A capo allows you to play fluently in difficult keys. Try playing Simon and Garfunkel’s ‘America’ or T.Rex’s ‘Ride A White Swan’ without a capo! Even if you had the strength to play in a key with many barre chords, such as Ab (as with ‘Swan’), it makes a different sound and prevents the embellishments typical of finger-picking styles because you won’t have any free fingers. A capo lets you get more out of a single open tuning by raising its pitch to different keys.

Does it matter what sort of capo I get?

Most capos fit most necks but a curved neck will mean a straight capo won’t make good contact with the top and bottom Es at the same time. If you want to capo a 12-string or nylon-strung guitar, check that the capo copes with the wider neck. Second, how quick a change do you need to make and how critical is tuning stability? If you need a capo for live performance then it is worth spending  extra on a quick-release model. There are even capos that let you set individual strings.

Singers will thank you for having a capo

A capo is the easiest way to change the key of a song to suit your voice or someone else’s. Imagine a song in G major with the progression G-C-D-Em. The chords are simple but let’s say the key is too low for you or your partner to sing. By fixing the capo at the third fret you can play the same open-string shapes but are now singing a minor third higher in Bb major (the true pitch of the chords now being Bb-Eb-F-Gm). A capo can also bring a key down if the highest notes of the melody are too high.

This extract is based on material in Rikky Rooksby’s Play Great Guitar (Infinite Ideas, 2008) now available as a downloadable book.
CLICK HERE FOR DETAILS.