What Your Picking Technique Says About You

Unless … that somehow isn’t the most important hand for guitar playing!

I mean, you may think your fretting hand is playing the notes, but it really isn’t. Most of the time your picking hand is actually sounding the notes.

In fact, what you do with your picking hand has a huge impact on your sound! This is why every guitarist can sound totally different while playing the same thing.

Here’s what your picking technique really says about you …

Downstrokes are the most aggressive way to pick notes. They can sound heavier because you can get more ‘weight’ behind each stroke.

You’ll find downstrokes used by rhythm guitarists in bands from Green Day to Metallica, mostly for this heavier sound. However, it can be difficult to get this technique really fast …

… and I definitely wouldn’t recommend it for faster lead playing!

‘Downstrokes are the most aggressive way to pick notes. … However, it can be difficult to get this technique really fast.’

This technique is for you if you either don’t play that fast, or aren’t really into the more advanced techniques. It could also be that you love the heavier, more aggressive ‘punk’ or ‘thrash metal’ sound … in which case you also probably have fairly toned arm muscles from all the guitar playing …

Here is an example of a riff that uses downstrokes:

Alternate picking is much more efficient than just using downstrokes! Playing a note on the ‘upstroke’ as well as the ‘downstroke’ means you get two notes for the price of one. This means you can play twice as fast, or with half the effort.

‘Alternate picking is … used … for precision and clarity.’

This technique is most famously used by guitarists such as Zakk Wylde (for aggression) or Steve Morse (for precision and clarity), and it is for you if you really want that clear, defined shred sound.

Here is an example of a pentatonic lick that uses alternate picking:

The idea here is that, instead of constantly picking up and down, you choose the most efficient direction to pick. For example, if you’re going from the A to the D string, you use a downstroke; going the other way (D to A) you would use an upstroke.

As you probably guessed, this requires a bit more thought than straight alternate picking. However, the movements are more ‘economical’, meaning it’s possible to go even faster.

‘[Economy picking] is probably the best way to pick if you want inhuman speed!’

This technique is most famously used by Yngwie Malmsteen, and is probably the best way to pick if you want inhuman speed!

Here is the same lick as before, but this time with economy picking:

This type of picking (sometimes also called ‘chicken pickin’ ‘) almost screams ‘country’! However, you might think of it as a hybrid of fingerpicking and using a pick.

Here is an example lick that uses hybrid picking:

This type of picking is pretty much self-explanatory … it’s used by classical acoustic guitarists and doesn’t involve a pick.

‘[Classical fingerstyle] was the original way to play the guitar (although that doesn’t necessarily mean the best way).’

If you use this type of picking technique, you’ve probably either spent a lot of time reading up on classical guitar styles, or you’ve had professional classical lessons. You’re into guitarists such as John Williams, Andrés Segovia or Ana Vidovic.

This was the original way to play the guitar (although that doesn’t necessarily mean the best way).

Here is an example chord progression using this technique:

This is where you use your index finger and thumb to pick the strings. This type of playing was made famous by the guitarist Merle Travis, but has also been used by James Taylor, Tommy Emmanuel, and others.

This is the style of fingerpicking that feels the most natural at first, due to how your hands work (these are probably the strongest two digits we have). However, sometimes it isn’t as efficient – or as useful – as the full classical fingerstyle, in which you use more fingers.

‘[Folk fingerstyle] feels … natural. … However, sometimes it isn’t as efficient … as the full classical fingerstyle.

That doesn’t mean it doesn’t have its place, though! There are plenty of great picking patterns that only use the thumb and pointer finger – especially in acoustic and folk music.

Here is an example of this style of fingerpicking: 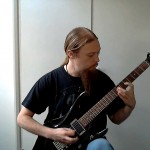 Written by Rob Barnes. If you liked this lesson, you might also want to check out his website, Chainsaw Guitar Tuition