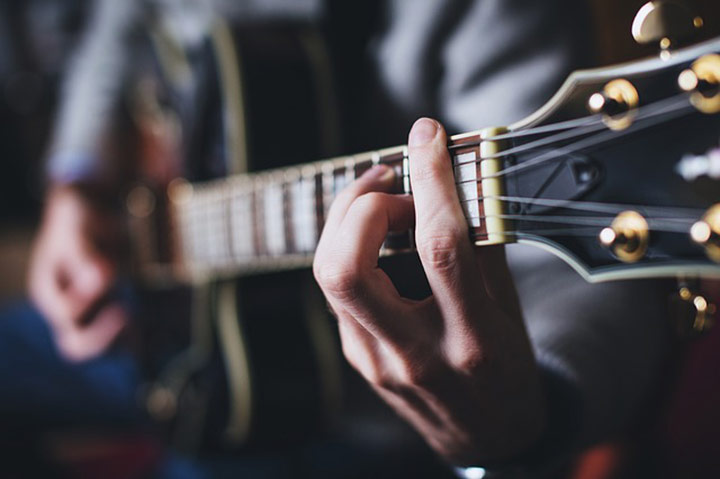 Sometimes, becoming a better guitar player isn’t all about practice time or techniques. Sometimes, it’s about what kind of guitar you’re playing. For me, one of the biggest learning opportunities for guitarists at any skill level comes from old, beat-up and worn-out vintage guitars. But what is it that makes these kinds of guitars such unique teachers?

An Intro to Vintage Guitars

Let me tell you a little story. Back when I was still very new to guitar, my dad told me that he had played for a few years when he was about my age. Of course, never having seen my dad play a guitar, my young mind immediately conjured up images of my father up on stage, rockin’ out like Jimmy Page. Unfortunately, my dad (to my disappointment) was not a rock star. However, he gave me a far greater gift than images of nostalgia filled rock-a-tude. He gave me his old guitar, which he’d found while cleaning out my grandparents’ attic.

It was a Harmony Rocket, single-coil gold foil pickups and all. 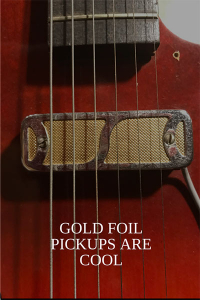 It wasn’t in great shape. A couple of the tuning pegs were missing, and the ones that remained required the brute strength of a bear to turn. There were cracks and dings galore. The pickguard was nowhere to be found. In short, it was a project.

But when you plugged it in…man, that sound. There’s nothing like the sound of a vintage guitar. Immediately I knew that I was going to fix this bad boy up and make it sing again. Which leads me to my point – this old guitar, which was nothing more than a cheap starter pack from Sears back in the 60s, made me realize the potential of guitars.

How to Work with a Guitar

Any vintage guitar is going to have issues. And as a guitarist, learning to work through those issues can be invaluable. You won’t always get the chance to play pristine, easy-to-handle guitars. A lot of the time, you’re going to have to take something sub-par and make it sound great. Which isn’t always that easy.

For instance, let’s say you’re playing a cool looking vintage guitar, but you notice that no matter what you do, it just doesn’t sound like it’s in tune. Then you notice that the neck looks bent. That’s weird. And suddenly, you’re opened up to the world of truss rods. Sure, it might be a bit nerve-wracking the first time you give your truss rod a good turn, but there’s no other way to do it: to straighten that neck, you need to adjust the rod.

That’s only one example. Another might be intonation. For those who’ve never delved into the intonation of a guitar, it can be quite daunting. The thing is, with just about any vintage guitar you find, the intonation is going to be off. You’re going to have to learn how to intonate. Some might be easier than others.

In my case, the Harmony Rocket is equipped with a rather limiting floating bridge that only has two points of adjustment on either end. I fiddled with that thing for longer than I even want to think about, and I was never was able to get it quite right. Of course, the Rocket is also outfitted with a steel-reinforced neck, which is not adjustable. So it was probably never quite straight, which makes intonation a tricky, if not impossible, job. 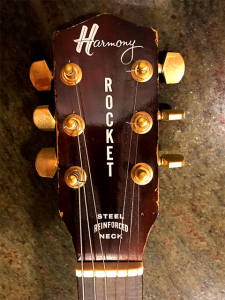 Be that as it may, if I had not been given that old guitar, I wouldn’t have experimented with intonation for…well, perhaps years.

How to Fix a Guitar

Besides learning how to adjust your guitar, a vintage guitar will more than likely introduce you to the lovely practice of repairs! Don’t worry, that excitement is only partially sarcastic. Actually, repairing your guitar can be pretty cool. It only gets tedious when you realize that a certain part that you need is no longer made. This is relatively common, since many vintage guitar companies have long since shut their doors. Not finding the exact part isn’t a huge deal, unless you’re going for a stock replica. The real trouble comes when you realize that a similar replacement can’t be found. But that’s a whole subject of its own.

In short, repairing a guitar brings you closer to it. You begin to understand its functions. Let’s say one of your bridge saddles is busted. When you go to install a replacement, you may just be hoping for a quick and easy job. But all of the sudden, the bridge isn’t just “where the strings start”; instead, it’s now a finely tuned machine-within-a-machine, which allows your guitar to produce any sound in the first place.

Now, you may be a seasoned veteran, and you might be thinking “yeah, of course”. If that’s the case, just think back to when you first started (if you can). Back then, pretty much every part of the guitar was a mystery. All you were trying to do was squeeze down an F major.

But even the most technical players out there might not have a grasp on certain aspects of the guitar. One of these such aspects is electronics. Just another wonderful part about vintage guitars is the natural deterioration of electronics. Issues like finicky tone and volume knobs, crackling input jacks, and buzzing pickups are pretty commonplace amongst older guitars. And when it comes time to replace them, all of the sudden you’re studying up on potentiometers, capacitors, and soldering techniques. It’s a rabbit hole that can really suck you in, and it’s often overlooked by players who’ve only dealt with newer gear (unless you’re into modding).

So while it might seem like a pain at first, fixing all the issues that plague your vintage guitar might just give you some insight into the inner workings of all guitars. The result is a deeper understanding of the instrument, and, hopefully, a greater love for it as well. There’s a little side bonus here too: if you get good enough at repairs, you can make some cash repairing others’ guitars.

The moral of the story here is that vintage guitars can teach you a lot, if you’re willing to work with it. It may not teach you how to play faster, or give you any awe-inspiring new techniques. But it will force you to examine aspects of the guitar that you may never have faced before.

The closer we can become to our guitars, the better. A guitarist that can set up his or her own instrument is instantly better off than one who can’t. Likewise, a guitarist that can repair their own guitar will have a greater respect for the instrument, which often leads to more satisfaction from actually playing it. To know how the sound is produced, and all the little intricacies that combine to make such a simple and yet complex instrument, is almost as rewarding as mastering the instrument itself.

Alex is a copywriter and vintage guitar lover. When he’s not repairing guitars, he spends his time working directly with businesses both large and small to create excellent copy that delivers an impactful message. See more from Alex here:https://manvword.wixsite.com/website or follow him on Twitter @LeBeardedScribe.