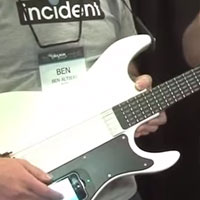 So, can anyone can play the guitar; right? The guys at incidentgtar.com believe so and have taken away the frustration of learning all the basics and enduring painful practice sessions by introducing the Gtar, which was another Kickstarter success, raising enough money to develop and market this neat little package. It is also fun to play, enables you to create music really quickly with its use being extended to recording and creating your own songs.

Essentially, gTar is fully digital and works by docking an iPhone in the body and uploading the gTar app. You will then be able to practice all sorts of exercises by following interactive LEDs that light up the fret board – all you have to do is follow those lights.

The clever bit is that you play in real time and, as you hit the correct finger positions and strings, it produces an electric guitar-like sound by using sensors that detect what you are playing. And even better, if you play an incorrect note, that particular note does not sound as it is muted out. So if you want to hear the notes from the vast array of sounds available (including synths), you’d better learn fast.

There is an ever-growing library of songs to choose from and 3 distinct levels of difficulty, so it is particularly difficult to become demotivated. It may not be everybody’s flavour but it is quick and easy and sets you off on the right foot if you want to learn by a more traditional method.

The guitar is also aesthetically pleasing and, to be honest, does not have the look of a digital guitar.

So, overall, another worthwhile and successful funding campaign that continues to spread guitar and music to the masses.

So watch the video and check out the gTar in action.