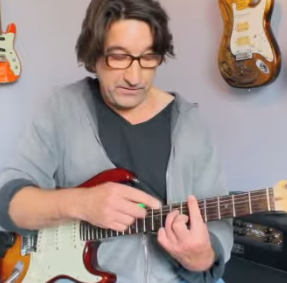 This is the third in a series of articles on rhythm guitar playing. You may find it helpful to review part 1 and part 2 before getting started.

There’s more to rhythm playing than simply strumming up and down. A few techniques can help make your performance more expressive and chords fun to play.

Mutes can help to tidy up and add punctuation to phrases. The strings can be muted with either hand. The strumming hand can prevent unwanted noises between chord changes by lightly touching the strings with the side of the palm, and when the fretting hand releases pressure, strings are also muted.

We can slide into a chord from one fret away on either side.

Or, hammer on and pull off notes above the barre.

Chords can also be arpeggiated by playing their notes individually.

You don’t always have to play the entire chord. Partial chords and double stops break a chord down into smaller parts and offer a new texture to the sound. Double stops are pairs of notes and partial chords are larger groups of notes found inside a chord.

‘There’s more to rhythm playing than simply strumming up and down. We can slide into a chord … [c]hords can be arpeggiated … [y]ou don’t always have to play the entire chord.’

We can also add notes that are in a related scale in the same location as the chord.

This example uses an Am7 chord. 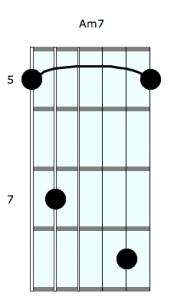 All of the notes in this chord can be found in the A pentatonic minor scale. 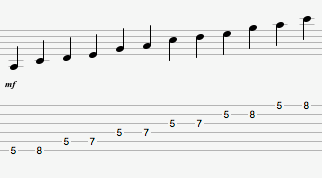 Here the scale has been extended to include C at the eighth fret of the first string.

Cascading down the scale can now embellish the Am7 chord.

Now, let’s put some of these ideas together.

This exercise is in the key of D major. It’s cunningly calling ‘DeComposition’.

Editor’s note: This recording is slightly different from the score/tab provided later in the article.

The chord progression is:

The original chords can be embellished with a few of our tricks.

Here’s a basic outline of what I’m playing: 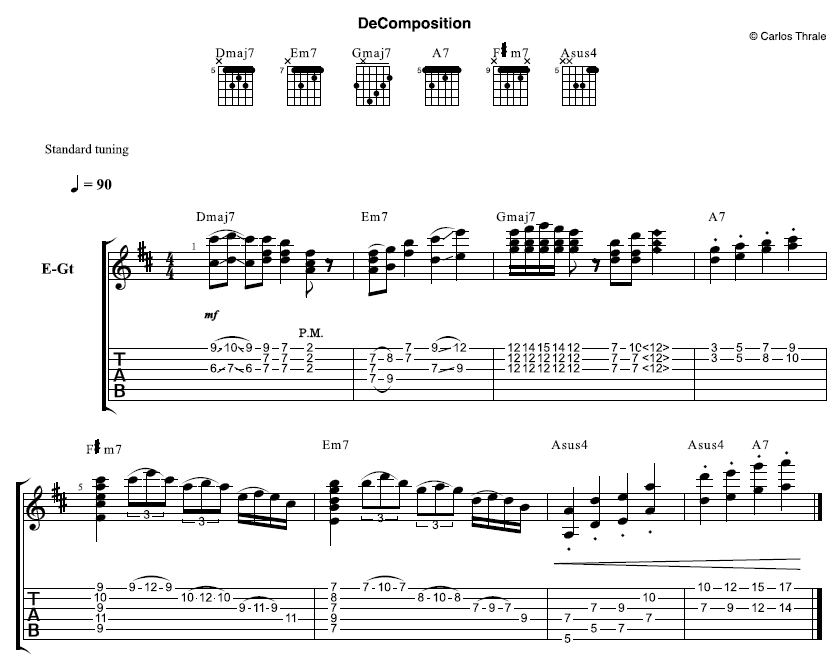 Throughout this piece both left- and right-hand mutes are used between each phrase to control the sound.

C# is played as an octave. This slides up a semitone to D and returns to C#. Then inversions of the original chord are used.

The notes on the second and fourth strings of Em7 are approached with a hammer-on.

Then D is played as an octave and slides up to E.

This bar moves through a partial chord. These are bunches of a few notes taken from the original chord. E is added to these notes as a link from the previous bar. When it appears it forms Em, the relative minor substitute of Gmaj7.

The final bunch of notes in this bar are natural harmonics at the twelfth fret. These form an Em chord.

Here the chord is extended to A11 (A:C#:E:G:B:D). Pairs of some of these notes progress up the fretboard, ending firmly within the original chord on A and C#.

In these bars the minor seventh chords are embellished with cascading pentatonic minor scales. After playing each chord both the barre and second finger remain in place while the additional notes are played.

The final two bars use the notes of each chord played individually as octaves.

Now you can explore some chord tricks by playing along with the ‘DeComposition’ backing track.

All of these chord tricks and ideas can be adapted to any style of music. I hope you’ll give them a try.

Article by Carlos Thrale. You can read more from Carlos on his website: http://www.carlosthrale.com.