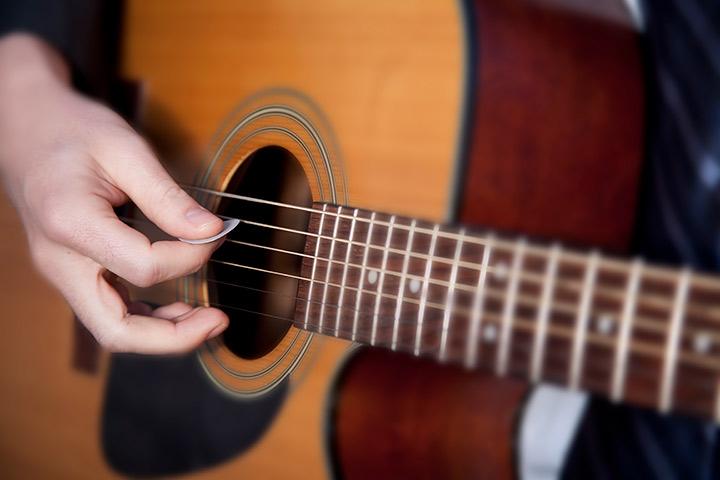 The guitar is a noble instrument that has been around for quite some time. Even though it gained a massive boost in popularity during the past few centuries, it was first used by native Egyptian tribes, and being a “guitarist” in those days was considered as a great honor.

Nowadays, we have millions and millions of stores that house all kinds of guitars – Les Paul’s, ESPs, Gibson’s, and more. We have pop and rock shows that kindle the dreams of young, aspiring musicians, and it’s only normal that you want to become one yourself. We’re here to help you on that quest.

Where do you start as a beginner?

The world of a guitarist is a huge one, and it’s easy to get lost as a beginner. Some people want to “get there fast” by skipping those “dull music theory lessons” while others spend way too much time on them, but the real thing is somewhere in between.

Needless to say, you won’t be able to pull off arpeggios and legato slides like Zakk Wylde on your day one, but with constant practice you’ll be able to get pretty close. It’s imperative that you don’t get discouraged, though. Start off slow and be consistent, and, basically, try to follow our essential tips and tricks, and you’ll do just fine.

We’ve split the “practice tips” sections into three different categories, and this systematization will be helpful only if you follow it in this order. First, you’ll have to lay the foundation stones – you can call them the “rules to becoming a great guitarist”. This section is dedicated to explaining what you need to “do and be” before we get to the actual lessons.

Start slow and train your patience

A beginner guitarist who rushes through the lessons will often end up in the same spot where he (or she) began. One of the reasons why people don’t have enough patience with guitar is because we often see musicians on MTV who play masterful solos, making it sound and look easy.

Don’t be that guy, as you’ll benefit more than you’d imagine. Break your lessons down into smaller segments, slow the tempo if need be, and repeat the songs and lessons you’ve learned several times. This “tip” is the “alpha and omega” of musicianship.

Being consistent about your practice is the key

On the other hand, the “trial and error” is what made the best guitarist what they are today. The whole idea of “learning as we fail” is true to the core, as your mind will remember the point where you’ve made the mistake, learn, and adapt. Putting it simple – the more you fail, the less you’ll fail in the future.

You might have heard a guitarist say “I don’t remember that, my fingers do”. Again, this is the statement that is tightly connected to the “trial and error”, only this time it correlates to “trial” more than “error”. Anyhow, once your practice sessions take hold, you’ll experience a certain sense of familiarity with your instrument.

Again, you’ll experience stagnation if you stick to the very basic lessons even though your skills have reached a higher level. For the sake of practicality, let’s assume that there are different levels of “beginner”, concerning the guitar skills.

There’s the “immediate beginner” – this was you when you took up the guitar for the very first time, clueless to the core. After that, there’s the “just beginner”. This was you after you’ve had a few ups and downs, several months by your PC, and a couple of weeks with your instrument. The further you go, the further you’ll be away from the “immediate beginner”, and soon you’ll reach the point where you just need a little bit of guidance to get your skills polished and shiny.

This is the point in time when you will want to start using the “helping tools”. These tools will modify your training experience, making it somewhat harder, but more useful all the while. We’ve made a list of examples of great helping tools in the section below, so feel free to check it out.

Dry practice and studying music theory will appear dull at some point, so you can always use some of the tools we’re about to mention to spice things up. These tools might not be able to boost your skills, per se, but you’ll definitely add some variety to your practice sessions. Consider using:

A metronome is a small device that “clicks” in the pre-programed tempo. It does a fairly simple job – it lets you know when you fall out of rhythm. There are different forms of metronomes, but most are easy to use and adjust.

Much alike to the metronome, the rhythm generator simply generates a certain drum pattern. It can be used to simulate a drum pattern of a song for you to practice more easily.

Chord charts are “cheats” – they tell you how certain chords are played, or they contain chords for certain songs. It’s highly recommended that you use them if you’re immediate beginner.

Tablature programs such as “Guitar Pro” or “Tux Guitar” are interactive tablatures that produce sound while letting you know how certain songs are played. They’re much alike chord charts, only a bit more progressive.

Now that you know how things should be, we should get to the point where you learn what to do. The practice lessons we’ve sorted below are supposed to get you on your feet:

Playing open notes involves strumming without fretting (holding) any notes on the fingerboard of your guitar. This exercise will help you concentrate on getting the feel of your instrument, but it will also substantially help you with how you perceive rhythm.

As most beginners tend to get confused about doing two things at the same time, you won’t have to worry about hitting the exact notes, as you’ll be playing the “open” ones, so you can’t possibly miss. There are different rhythm exercises, such as practicing songs in 4/4, 6/4, 6/8, and there’s the issue of odd time signatures (5/8, 5/4, and such). We recommend that you go with 4/4, as it’s the easiest way.

Chords can be defined as various figures comprised of several notes. The easiest chords are often comprised of two or three notes while some complex chords involve the entire neck (six notes). Mastering basic chords will let you handle songs more easily, but they can also be used to warm up better, improvise, and even make your own songs.

On the other hand, scales are practically “boundaries” for certain notes. The reason why they’re called scales is because they’re kind of like a “ladder”. Most scales begin with a low-pitched note, and they progress to higher notes. Once you get a handle of simple scales, you can begin practicing moving up and down “the ladder”.

Now, once the time has come for you to practice actual songs, you might bump into certain problems. First of all, you might lack a certain skill, such as speed, or accuracy of your fretting hand. Other problems might include that the song involves advanced guitar techniques, such as legato slides, hammer-ons, pull-offs, and such.

Either way, don’t be discouraged. The point of practicing songs is like transforming the theory into practice. Note that it wouldn’t be smart if you skipped everything until now and simply jumped to practicing songs, as you’ll definitely lack both the skill and resolve to see it through the end.

Now, just don’t get discouraged if the song appears too hard on the beginning. You shouldn’t skip certain parts, but you could always improvise if a certain part seems too difficult, or even impossible to tackle. As we’ve said earlier, be patient and consistent, and you’ll eventually succeed.

I’m Alex Frank who has worked sound technology industry for 10 years now. Today, I am an affiliate blogger who likes to educate my audience more about sound technology. Visit to musicinstrumentscenter.com to find all information about music that you need.