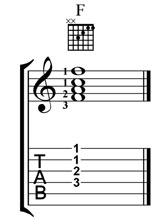 One of the most common stumbling blocks I see beginner guitarists struggle with is the F chord. This is because it is usually the first time they have encountered the challenging technique of playing several strings with one finger (a ‘barre’). I remember being stuck on the F chord for some time and getting very frustrated with it.

However, this seemingly inevitable frustration can be avoided by following the ‘F workout’ below.

The first thing to do is just to get used to the feeling of playing a barre. Try playing the  2-string barre everyday for a couple a minutes. Start by playing the strings together, then try them one after the other. If you have any weakness in your technique doing this will find it. However, do not hold the barre down for 2 straight minutes. You will need to develop the muscles in your hands and until you have done this there is a small risk of muscle damage.

Don’t rush this; just keep doing it until it is comfortable. If you are learning from a book or with a teacher and you know the F chord is coming up try and start doing this exercise a month or so before you expect to come across the chord.

We are going to do a similar exercise to Ex. 1 however now with 3 strings.

Once you are comfortable with Ex. 2 try the same exercise but with the 2nd finger playing the G string. Again, don’t rush. Only move on when ready.

If we add the open D string to the 3 string chord we have just played it becomes a D minor 7th (Dm7). Next we are going to use this Dm7 in a couple of picking pieces that have been designed to shape the muscles in your hand to prepare them for the F chord. You will notice that the chords used are all similar to an F without ever being as tricky. Here are the chords: 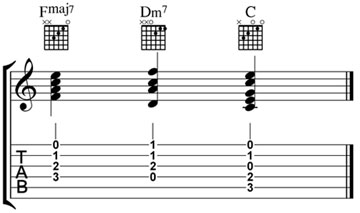 When playing exercise 4 make sure you hold your fingers down as if playing a chord. I also recommend using the open strings to your advantage. At the end of the 1st bar going into the 2nd and at the end of the 3rd bar going into the 4th you will see that there are 2 open strings in a row. I would change chord shape while playing these open strings. It will allow for a seamless transition and will give you an extra moment to finger the chord correctly.

Next we have exercise 5. It is a little harder than Ex. 4 as the chords change more frequently. 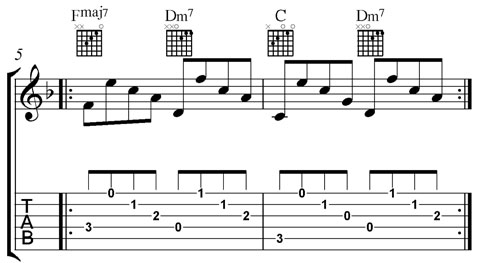 If you’re still with me at this point well done! All that is left is to try playing the F chord. It should feel familiar as we have prepared the hand to play the barre and have shaped the muscles to feel comfortable with the chord shape.

Article by Rich Fowles. Read more from Rich on his web site: http://www.richfowles.co.uk