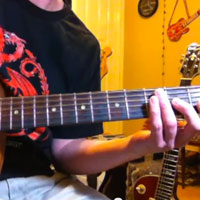 For the premier instalment of Solo Blues we are going to look at a 12 Bar Blues in the Key of E. This piece is centered around the open position of the E blues scale.

The E blues scale is made up of the same notes as the E Minor Pentatonic with the addition of the flat 5th in this case the Bb note. Here is the guitar tab for the first position E blues scale and a second position that extends the range of the scale a little bit.

Here is the guitar tab for the first 4 bars.

In the first bar we are sliding into the B note at the 4th fret third string. Followed by the D on the second string. The interval choice of the 5th and 7th both work very well over the E7 and are in fact chord tones. We then move back to the B note on the third string and do a triplet that moves from B to G. In the second bar we begin on the root note E and play more chord tones E D and B. The first two bars are repeated.

For bars five and six we are playing over an implied A7 chord. It is implied because we are playing solo acoustic guitar and there is no one playing chords in the rhythm. Bar five is very similar to the first bar except we resolve the the root note of the A7 chord – A. The B in this instance now takes on the interval of a second or ninth against the implied A note but it works because the pattern is familiar to the the listener now and there is a strong resolution to the root note. In bar six we again emphasize the root and also play the open G which is a flat 7th. For bars seven and eight we are back to the E7 chord. The lick here starts with a sixth interval of the B to G which is common in acoustic blues. The eighth bar ends on the root of the chord E.

I have chosen to leave a rest here for bar 9. It just sounded good that way to me. In the video example you’ll note that I played a bit loose with the speed of the final four bars slowing and speeding them up as desired. This allows the music to breath a little bit and be freer which is a luxury you have as a solo artist.

Check out the video for the phrasing and a break down of the guitar licks. Hope you enjoy it. Have fun playing along. For more guitar lessons licks and riffs be sure to check out my blog www.lickoftheday.blogspot.com and look for future columns in Guitar Coach Magazine.

Article by Dave Ward. Read more from Dave on his web site: http://www.lickoftheday.blogspot.co.uk