The great thing about the guitar is how visual an instrument it is. Patterns and shapes repeat themselves, making it easier to learn and play.

In this article we will see a great example of this by taking a look at the major scale, analyzing how the scale is laid out, and using this knowledge to play a major scale from any note of the fretboard.

Let’s first see how the major scale lays out on a single string so we can better understand the structure of the scale. Using the diagram below, play the notes on the top E string in the order shown, starting first with the open E string #1, followed by #2, #3, etc.

You should recognize these notes played in this order as being the sound of a major scale, starting from the first note #1 and ending with the last note #8, one octave away from the note you started with. You have now played the scale of E major on a single string.

What Is the Major Scale?

The first thing we can take from this is that a major scale is made up of 8 notes, with the first 7 notes being unique and the 8th note being the same note as we started with but one octave higher, in this case E.

‘A major scale is made up of 8 notes, with the first 7 notes being unique and the 8th note being the same note as we started with but one octave higher’.

The second thing we can see is that each space – or interval, to use the correct musical term – between the notes is either a ‘whole tone’ or a ‘semitone’. A whole tone on the guitar has two frets between notes, and a semitone has one fret (see diagram below).

Playing the Major Scale Anywhere on the Fretboard

The pattern in which these intervals occur is the same for every major scale:

So using this information, we can take any note of the fretboard, play these intervals in the order shown, and produce a major scale. Some examples are shown in the diagram below. Play through each example, and as you do, see how the interval patterns repeat.

Once you have worked through these examples, explore this pattern from other notes on the fretboard and really get this information under your fingertips.

‘We can take any note of the fretboard, play these intervals in the [same] order … and produce a major scale.’

As you become more familiar with understanding the major scale, you will be able to build more interesting lines and riffs into your playing. By combining the more traditional “across the fretboard” scale approach with this “horizontal” scale approach, you will open up many more possibilities, and your fretboard knowledge and overall musicianship will improve. 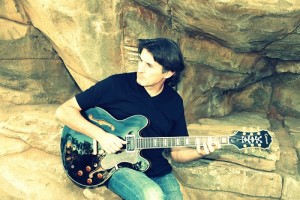