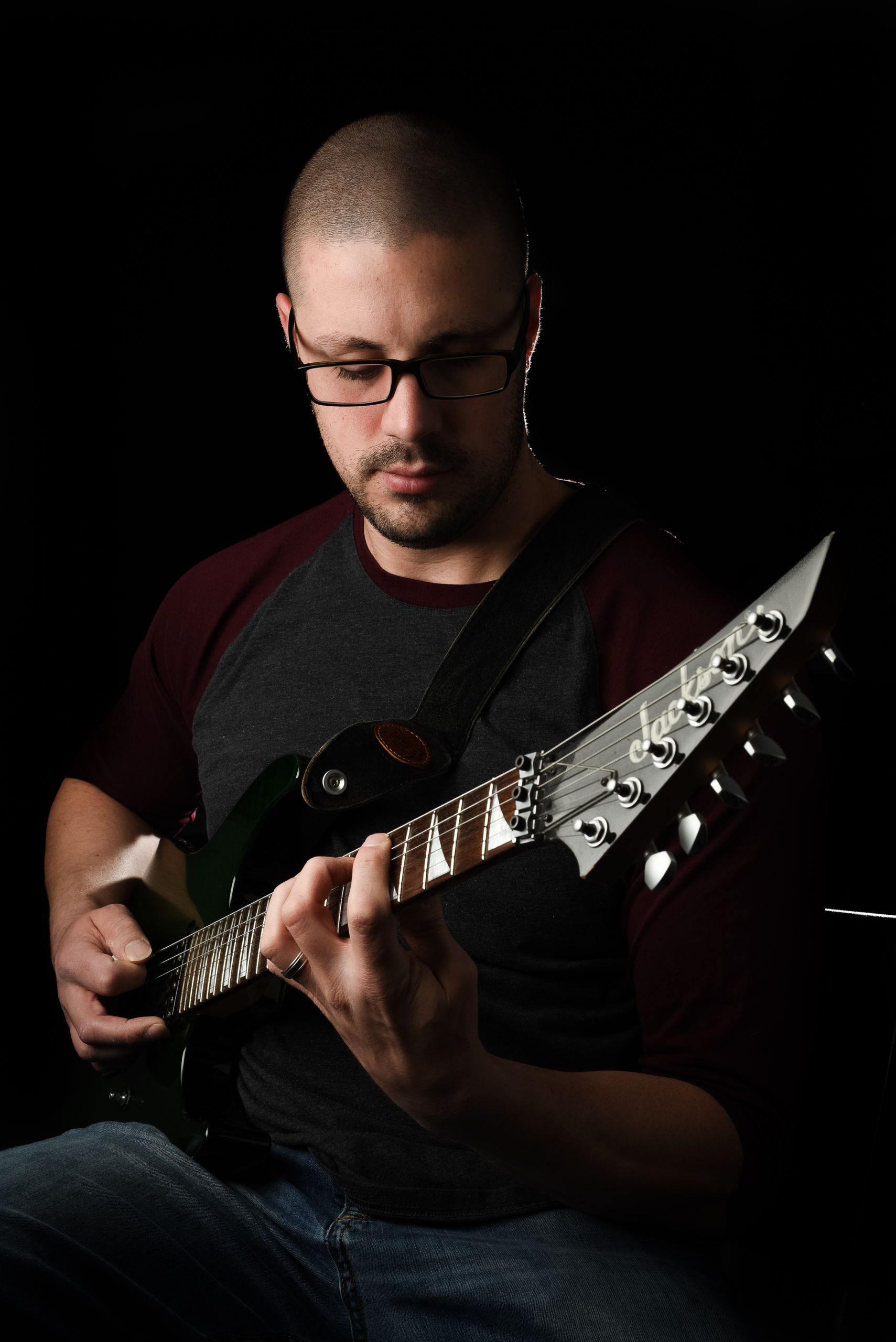 Guitarists live and die by chords. Practically every song is based on a chord progression, regardless of the genre.

So, what is the difference between a major and minor chord? How are chords constructed? When soloing, how do I know which notes will sound best over the chords?

These are questions guitarists ask all of the time, and in this lesson series we’re going to begin answering them … right … now.

What You Will Learn:

Triad: A set of three notes stacked in thirds. The triad is the basic ‘prime form’ of a chord.

How to build guitar triads using thirds with the following formulae:

Let’s play an example of a M3 and m3 on the fretboard in FIGURE 1 to illustrate each interval: 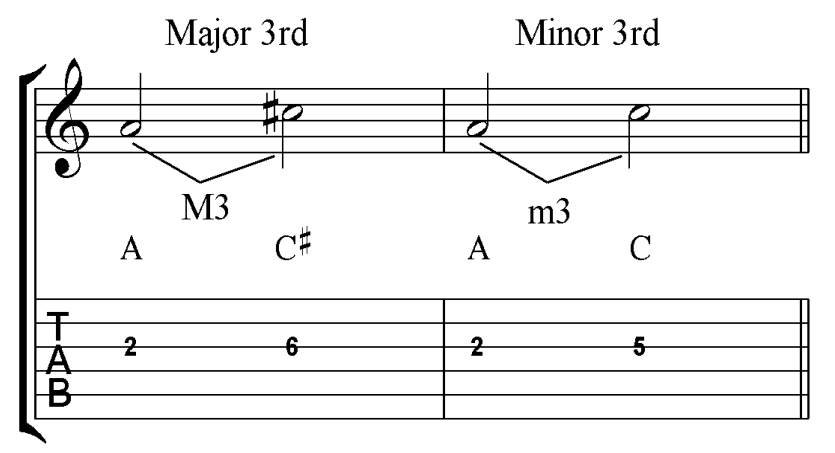 Notice in FIGURE 1 that the letters are the same: ‘A’ and ‘C’. The letters have to make a skip in the alphabet (A, then skip B to reach C).

Below, in FIGURE 2, are a few more examples of thirds: G-B, and B-D. Sometimes a flat or sharp is needed to build a specific type of third, just like in FIGURE 1. Play these examples on one string and as a 2-string chord and listen to the different sounds of M3’s and m3’s.

*NOTE: Guitar triads have a slightly different shape on the G and B strings due to the difference in tuning. Every other set of strings (E-A, A-D, D-G, and B-E) will have the same shape for M3 and m3.

Now that you have an idea of how to build M3’s and m3’s, you’re ready to stack thirds into a three-note chord called a triad. The triad is the most basic, prime form of a chord. All chords begin with three notes, which are then repeated in various octaves to create larger chords to strum on the guitar.

‘The triad is the most basic, prime form of a chord.’

G-B is a third, and B-D is a third. Two thirds stacked create a larger, outer interval of a fifth: G-D.

The Four Types of Triads

Next, we need to look at the specific type of thirds that build different kinds of triads. In FIGURE 3, there are diagrams of the four types of triads. Focus on the left side of each diagram, which shows you the combinations of M3’s and m3’s that make up each triad.

*Note: Chords are defined by intervals above the root, shown in bold. For now, stick to the left side of the diagram to focus on stacking the thirds from the root upwards.

Playing Triads on the Guitar

Let’s start with major and minor guitar triads in FIGURE 4, since they are the most common. Here they are in single-string form and as chords.

‘The only difference between a major triad and a minor triad is the middle note is lower in the minor triad.’

Listen to the difference in sound. Notice that all G chords are spelled G-B-D, adding flats and sharps when needed to make different kinds of thirds. Also notice that the only difference between a major triad and a minor triad is the middle note is lower in the minor triad. 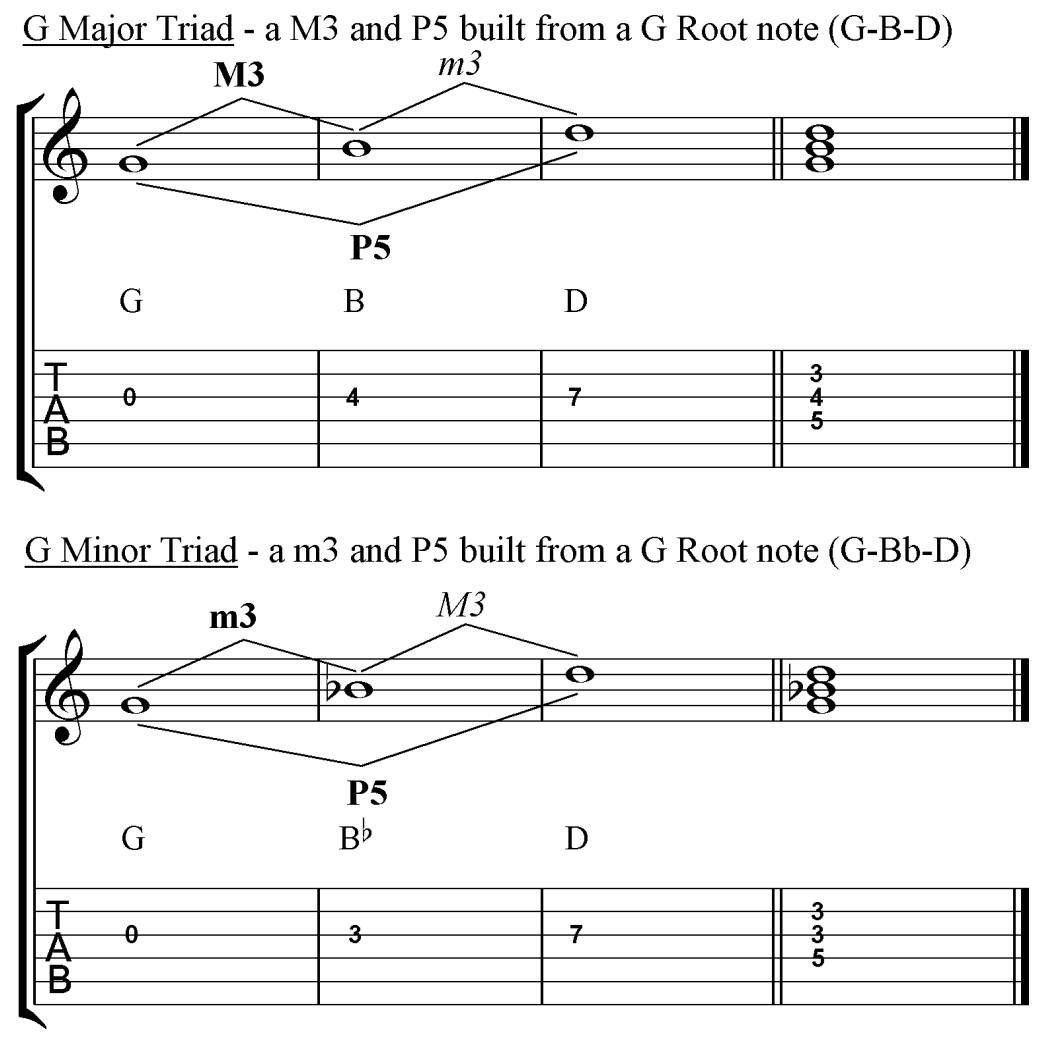 The diminished triad is used less than major and minor, and augmented is even rarer. 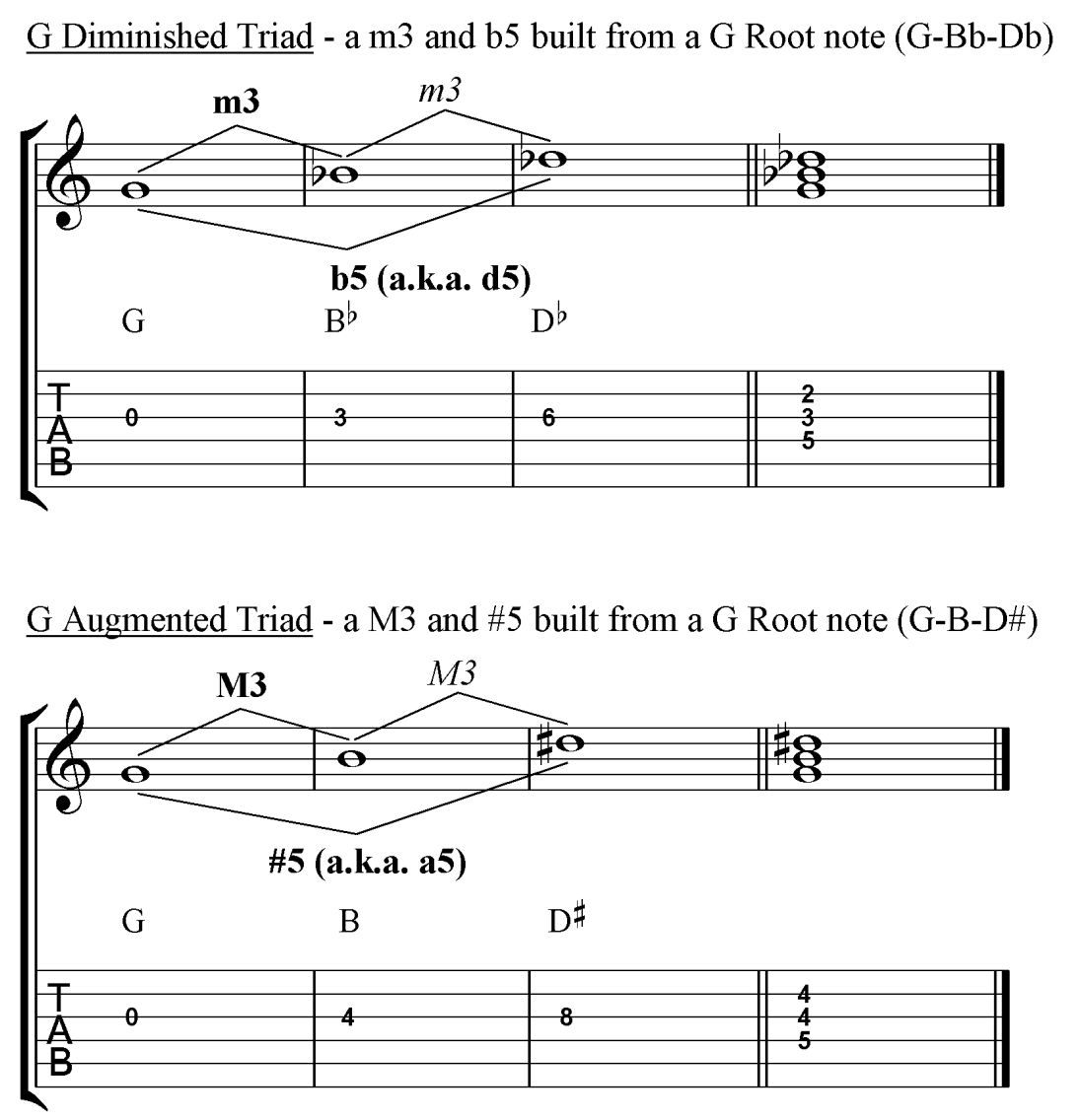 Congrats! You’ve just made a big step towards understanding music theory. As we continue in Part 2, we’ll begin to see how all of this ties into playing ‘in a key’ and how triads work with scales! Don’t miss it!

Examples of Thirds and Triads on All Guitar Strings

NATE RICHARDS is the owner of Richards Guitar Studio and Richards Rock Academy in Aston, PA. Visit www.richardsguitarstudio.com for free video lessons and tabs and to learn more about Nate’s guitar teacher training program: Rock Guitar Mastery System™. New and seasoned guitar teachers alike have benefited from learning Nate’s methods, all of which have been thoroughly analysed and edited many times over.