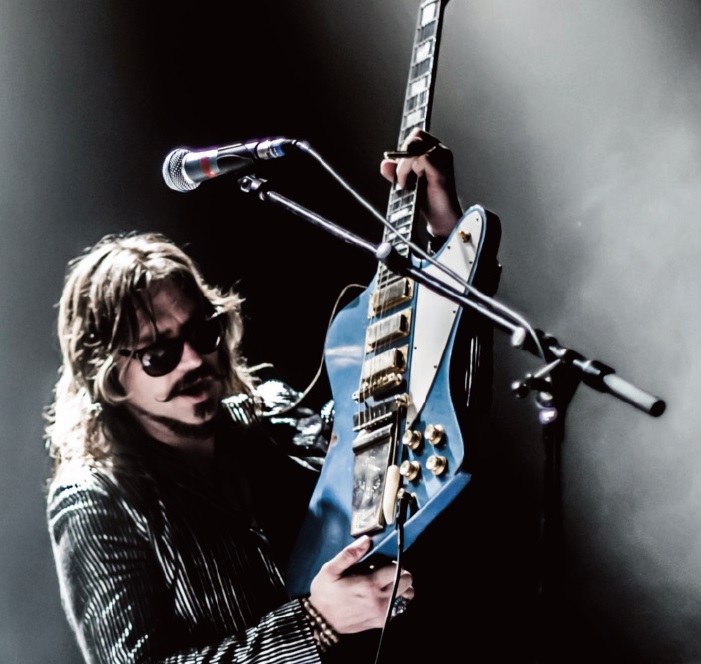 With a strong combination of hard work, relentless touring, strong singing and playing and memorable material, California’s Rival Sons are keeping the hard rock fires burning brightly, and thankfully so. The Sons are currently touring Europe, promoting their latest release, Head Down, building a large fan base, and will soon return to the USA, fresh with ideas for their as-yet recorded disc.

Scott Holiday grew up in a musical family that just happened to love rock ‘n roll.

“My family shaped my musical taste immensely. Being around my parents, aunts and uncles at their parties and around their music, played way too loud on massive stereo systems, had a huge effect on me. They were party people, and would basically preach to me about rock bands as deities. It became a huge part of my childhood to discover as much of this music as I could; stealing their tapes, listening to their vinyl, just completely immersing myself in it. Eventually, I wanted to be the creator, as well as the music lover.

“I picked up the guitar around age 12, and studied with a teacher very briefly, just to understand the basics of the instrument and to learn a few songs. After that, I was all self-taught. I learned by reading guitar magazines and playing with other musicians-this was my early training. And I picked things up by ear. My very first influences ranged from Led Zeppelin, the Stones and Beatles, to the B-52s, Guns & Roses, Rush, Pink Floyd, even Metallica and Anthrax. I was into all kinds of guitar music. When I was home alone practising, I’d leave the TV on and play along with jingles and theme music, whatever was on.”Like many youngsters, Scott started on an acoustic.

“My very first guitar was a nylon string acoustic, but my first real electric guitar was a Hondo II, a Les Paul copy; blond with black binding, like Marc Bolan. Unfortunately, that guitar didn’t survive my youth, as I took it completely apart and tried swapping virtually every part, including the neck. I had a big fascination with every aspect of the guitar from a very young age.

“That music was just presented to me at a very young age. It was the music I heard in my crib, my nursery rhymes. Besides the brainwashing tactics my folks used on me (laughs), there was definitely a sense of exploration and experimentation with a lot of the music from that era which is massivel appealing. Huge style statements were being made, recording was jumping leaps and bounds. It was a stirring time of counter culture and war drug experimentation, spiritual awareness and even sexual revolution. It was a hotbed for art of all types, and rock ‘n roll thrived.

“Rock ‘n roll will never die. When I started this band, I felt a void for raw, honest, dirty, soul-based rock that hasn’t forgotten the roll. We started the band to fulfil this mission.” 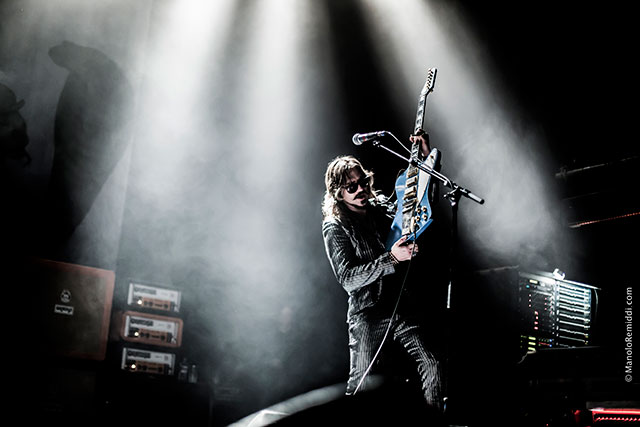 “I’ve been pretty crazy on a garage rock and “beat scene” vinyl binge for about a year now. I just snapped up copies of The Monks, Black Monk Time, and The Standells “Try It/Banned.” There’s just tons of great stuff to discover. I’m super big on The Strawberry Alarm Clock, The Chocolate Watch band, The Blues Magoos, Count Five, the Thirteenth Floor Elevators…and tons more.”

I asked Scott what advice her gives to young guitarists trying to emulate his style. What study methods, both traditional and contemporary did he recommend?

“In general, I tend not to give much theory based advice. And rather focus on more general, practical points. For young players, I’ll tell ‘em to learn all their favourite songs, then get a good chord book and re-learn those same songs with different chord positions. Really though, I’ll emphasize to just have a lot of fun with it. That will lead you to want to get challenged. Read the guitar mags to learn new things and new songs.

“If it’s a player beyond that simple advice, somebody that’s already really playing, I’d recommend they play with as many other musicians as they can, and don’t just listen to other guitarists. Listen to anything; horns voices, anything with strings, reeds and beyond. Listen for and discover melody and texture, rather than get overly comfortable in patterns.”

We wanted to know how Rival Sons got together,and Scott filled us in.

“The band really started about four years ago, but I started putting the band together a few years before that, right after leaving another group that was signed to Atlantic Records. It was at the seminal ‘record industry going down’ moment. We spent seven figures of their money, which they feared they would never recoup. They were firing complete floors of employees. They were just unfocused and in a huge transition. We left because of all that. It seemed like the right thing to do; like jumping out of a burning building!

“I was working with a different singer, and from there I was introduced to (drummer) Michael Miley, on the recommendation that he was perfect for what I wanted to do; ‘born the same day as Keith Moon, the melding of Moon and John Bonham.’ We hit it off right away. We played with all sorts of bass players, until Michael brought in a friend he played with on a jazz gig. The ‘friend’ was not so rock ‘n roll, and had an extensive background in jazz, soul and funk. He thought John Paul Jones was a naval sea captain (laughs)! So, we now had Robin Everhart.

“We signed to EMI, made a record and played a bunch of shows, little tours. That record got tied up and was never released, at which time it was a key moment for me to rethink things. I felt that our singer was not on the same page as the three of us, plus, I had to write all his lyrics and melodies, and that’s not what I wanted to do; I wanted a song writing partner.

“While innocently mulling around the Internet, I came across Jay Buchanan’s website, and after about ten seconds of hearing one of his songs, I called the other singer and told him it wasn’t working out. Just knowing that a guy like Jay existed was enough for me to make the decision to move on. I told the guys about this Jay Buchanan dude, told them he was undoubtedly 110% our dude, the guy I’ve been searching for for the last ten years.

“Miley connect me and Jay and we qualified each other mostly speaking about a lot of old blues artists, the lineage of rock ‘n roll, what was incredibly right, where it all went wrong, and more importantly, what was missing today. We felt something was missing in rock today-a void. I wanted something to fill the gap, and thought there must be a bunch of people feeling the same way. We played together a couple of times, and by the second time, we all knew were gonna’ stay on it together.”

Scott is known primarily as a Gibson Firebird player, but like most of us, he has many guitars at his disposal, both for live work and the studio.

“I’m a total gear nerd, man! So is my producer. Right now, I’m using two reverse ‘Birds-my Blue- Bird with the Tom Short pickups, and a Kauer banshee, ‘Goldie,’ with custom Chris Klein pickups. I also have a ’65 n0n-Reverse ‘Bird, also with custom Tom Short pickups, and a ’62 Fender Jazzmaster with Lollar P-90s. That’s my live quiver. I have another Kauer being built right now. I’ve already named it ‘Excalibur;’ the one guitar to rule them all! You’ll see.

“In the studio, we use a bunch of other stuff; a ‘60’s Harmony Rocket like Dave Davies, a ’54 Les Paul Conversion, a ’63 Fender Tele, a ’60 Gibson ES-335 with factory Bigsby, and Art Davis custom acoustic. At home, I have some things lying around, including a ’73 Gibson ES-1275 walnut doubleneck, a ’72 Fender Tele Custom, an Airline Coronado, a couple of Strats, and there are more in cases that I can’t remember.

“I prefer a good guitar; the right one for any given song, vintage or new, although some of the old ones are unbeatable. I general, I might say that vintage guitars are much better. They have mojo; ‘haunting mids,’ and all those ridiculous things we like to say (laughs)!”

I asked Scott about his favourite blue Firebird and how he acquired it.

“Man, the Firebird was a lucky thing for me. After making Before The Fire, I felt I needed something different. I played tons of guitars on that records and needed to find something to cover a lot of the tones. I happened to come across my ‘Blue- Bird’ online while searching around. I know you shouldn’t buy a guitar without playing it, but I threw caution to the wind. Something was telling me to get this guitar.

“When it arrived, it was even better than I thought it would be! It looked better, sounded killer, had a huge neck, which I love (Writer’s Note: So do I, Scott!). It was just a total man’s rock ‘n roll machine. We’ve been best friends ever since.”

The Rival Sons are on a European tour right now. How does he cope with life on the road?

“We’ve been at it pretty steadily for the last two to three years, and it’s just getting bigger every time we come out. I have a family at home, which reduces the fun level significantly. Playing and delivering the live show is fantastic, and when I’m home too long, I get anxiety about not being out there, but after a few weeks on the road, I start missing the wife and kids desperately. Other than that, we’re having a great time doing what we love for people who love it. I feel absolutely blessed to have this job. Every night is somebody’s ‘big night’ they’ve been waiting for, for weeks maybe months-and we get to give it to ‘em. It’s wonderful, really.

“Rock ‘n roll will never die. When I started this band, I felt a void for raw, honest, dirty, soul-based rock that hasn’t forgotten the roll. We started the band to fulfill this mission.”