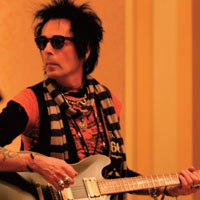 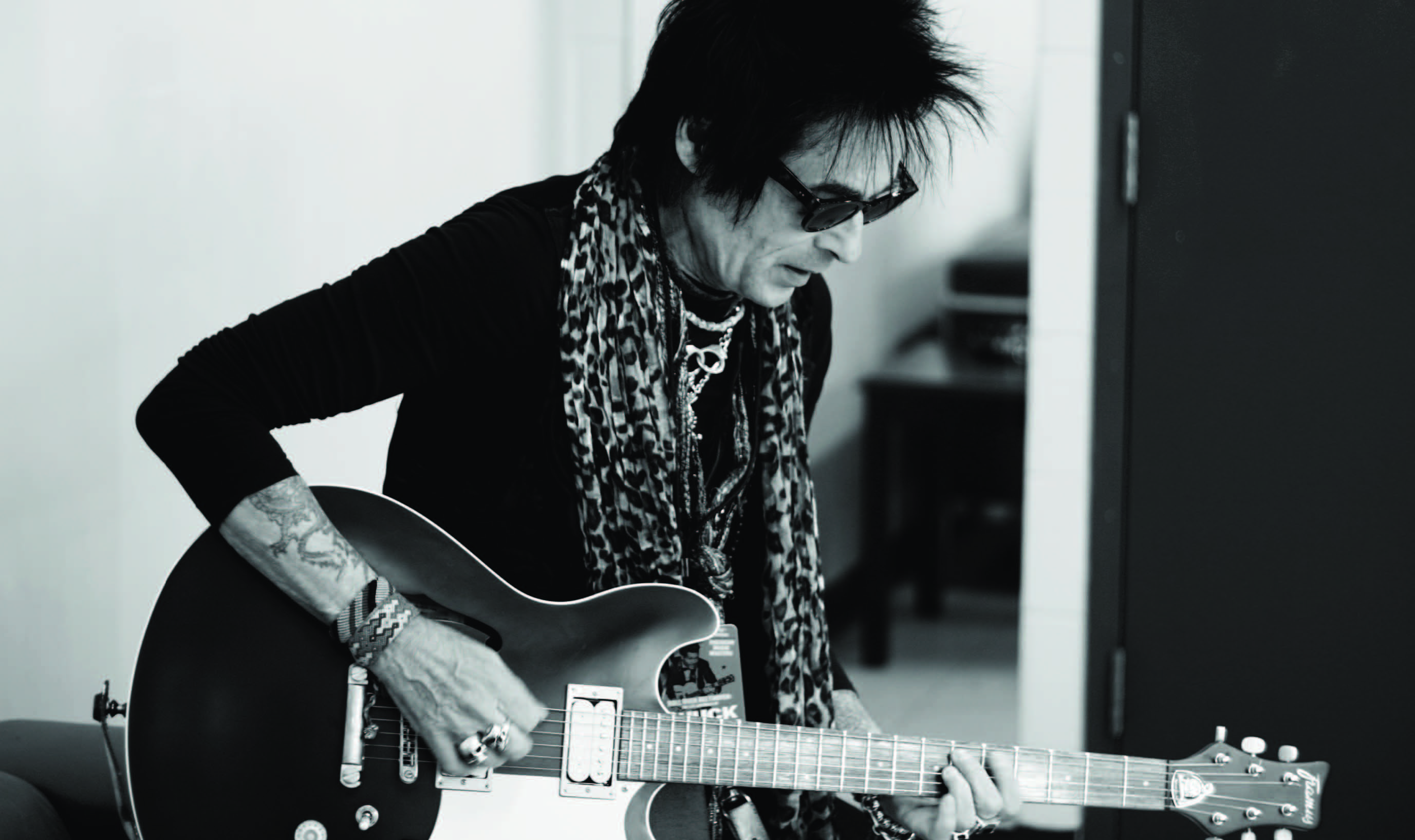 Like many parts of the United States, New York City has its own dialectic peculiarities. One of them is the pronunciation of any word with the “oi” sound, as if it were “er.” Spoil becomes “sperl,” Foil becomes “ferl,” and oil becomes “earl,” as in, “Watch out for that earl slick over there on the highway.”

So, now you see how Frank Madeloni became “Earl Slick.” Pretty cool, and very New Yawk, as we say around here.

In all seriousness, Slick, as he likes to be called, a former Staten Island street kid of Italian descent, who now lives in rural upstate New York, is undoubtedly rock’s ultimate guitar hero sideman. He’s worked with David Bowie for years, and appears on Bowie’s new single, “Where Are We Now,” as well as the artist’s latest CD, as yet to be released as of this writing. He was prominently featured on John Lennon and Yoko Ono’s album, Double Fantasy, and has worked sessions with Leo Sayer, Ian Hunter, Tonio K, and many others. He’s gigged with his own band, as well as many others,including Phantom, Rocker & Slick, Dirty White Boy, Slinky Vagabond and Eon. In 2011, Slick joined the New York Dolls for a tour.

When asked how he started on guitar, Slick relied, “The Beatles got me interested, but it was The Rolling Stones that pushed me over the edge.When I saw The Stones, I said, ‘That’s what I want to do with the rest of my life.’ My father didn’t like The Beatles, and he hated The Stones, so that was an incentive.

“With The Stones, it was the blues and R&B that got to me. The first couple of Stones albums were all covers of Delta and Chicago blues, and Chuck Berry rock ‘n roll, and that got my attention. They’re still the definitive rock ‘n roll band; their music, their image, the lifestyle. I saw their recent concert in Newark, New Jersey, and walked out on fire! The interplay between Keith Richards and Ronnie Wood is amazing. They’re even stronger today than they were years ago.”

Like so many kids in the ’60’s, Slick is primarily self-taught. 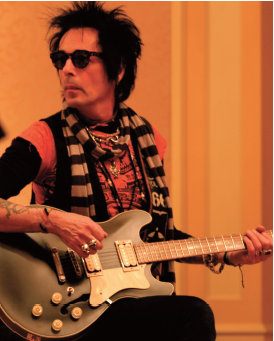 “I took three guitar lessons from a guy who taught me songs like ‘Little Brown Jug’ and stufflike that. I learned by networking in the street. I would watch guys in the neighborhood who had bands. I learned chords out of fake books, and I never learned a guitar solo note-for-note. I would emulate the style and get the jist of the song, but I’d make up my own solos. I had friends who would spend hours learning every Jimi Hendrix solo. I didn’t understand that.

“I always tell kids who want to play guitar to concentrate on learning to play rhythm. If you can’t play rhythm guitar, you’re not a guitar player. I actually think I’m a better rhythm guitar player than a lead player, but I can do both at the same time. I tell young guys to get a decent guitar and an amp with tubes, and just work on their tone with no pedals. Later, they can add pedals. In the beginning, learn to make your guitar, amp and fingers react as one.

“I do Rock School sessions about six times a year, and it’s gratifying as hell, but I hear these kids trying to shred with shitty transistorized amps, and it drives me crazy. I say to them, ‘Dude, you have got to calm down and get some tone with a tube amp.’

“Sometimes, when I’m checking out stuff on You Tube, I’ll click on some of those online guitar tutorials on the side of the page. Some are good, some are crappy, and most of them are wrong.”

Slick got his first major gig touring with David Bowie in 1974, on the Diamond Dogs tour, after Mick Ronson left the band. Composer/arranger Michael Kamen recommended Slick to Bowie.

“I got that gig because I was the biggest pest in the world. I was tenacious. I was playing guitar practically 24 hours a day, and I was there at the right time. Michael Kamen took me under his wing and gave David my number. I replaced Mick Ronson on that tour, then did the Station To Station album and tour. I left in ’76 after some management nonsense, and came back in ’83 for the Serious Moonlight tour. I’m on David’s new single and album, and the phone is ringing off the hook right now. It seems like I’ve been the on again-off again guy with David, but it was really a matter of scheduling conflicts and logistics that kept me from playing with him more than I have. And David got into electronics heavily in the ‘90’s, and my style didn’t fit what he was doing.”

One of Slick’s most memorable experiences was working with John Lennon and Yoko Ono on Double Fantasy. Slick’s manager at the time got a mysterious phone call from producer Jack Douglas.

“That was quirky. Jack called and asked if I was available to play on some sessions for a very famous artist, but he wouldn’t tell me who it was. It was a big secret. I put two and two together and guessed it was John Lennon. John wanted me there, because I was a “street” player. He had Hugh McCracken, who’s a great guitarist, and is schooled and can read charts, but he doesn’t play anything like me. I was the wild card.

“I had a lot of freedom to create. John would give me an outline, and I’d work around that. I’d sit with him and we’d run through the tunes, and try things. I might play something, and he’d say, ‘That’s good.’ I liked the freedom and the challenge. I’ve always known that the way to get the best out of someone was to let them do what they do best. That’s what John did with me.

“To tell the truth, I got to play a lot more adventurous stuff on Yoko’s tracks.”

Not long ago, Slick and fellow guitarist and Bowie alumnus Reeves Gabrels collaborated on a program called Onstage with Earl Slick, a program similar to the Rock Fantasy Camp idea. Geared toward “serious recreational guitarists,” Slick, Gabrels and a rhythm section would settle into a nice recording studio for a weekend in Rhinebeck, New York, and according to Slick, “We played with accountants, lawyers, doctors, guys with heavy duty day jobs.

“We played, wrote songs and recorded them. Everybody went home with a CD they made. There’s a nice house on the property they stayed in, and we fed them great food. It was a lot of fun, but it became a logistical nightmare, so we’re not doing it anymore. Maybe we’ll start again at some point.”

As far as gear, Slick has been using a variety ofamps, including Sommatone boutique models made by New Jersey resident, Jimmy Somma.

“I was in a music store in New Paltz, New York, and tried out one of Jimmy’s Roaring 20 watt amps and loved it and bought it. I sent it back to Jimmy and had him convert it to 40 watts, because I play so loud. Then, Jimmy developed the Slick 18 watt model for me, because I wanted something with less wattage (author’s note: I have a Slick 18 also, and it’s a killer amp). I’m also using Orange amps, and am going to try out a new Fender Bassman reissue at NAMM next week. Live, I’m running four rigs, including the Roaring 40, and the Orange stuff. I have a great old ’72 Ampeg VT-40 that sounds amazing, but I won’t take it out on tour.” 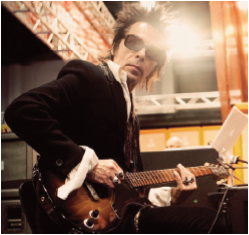 In terms of guitars in use at the moment, Slick plays a Framus Earl Slick signature model that features a double cutaway Swamp Ash body, a bolt-on maple neck, tusq nut, jumbo frets, an optional Bigsby trem, TonePros bridge, and either P-90 or humbucking Di Marzio pickups. A heavy duty flight case is included. He also has a Fender Custom Shop ’72 Telecaster reissue that he uses extensively, and a Framus Mayfield model guitar. Of course, Slick’s guitar collection is extensive,including his old Gibson SG Junior, the same one he used on his first Bowie tour in ’74.

“Framus has been very good to me. They offered to make me a signature guitar to my specs, and it’s a very high quality instrument. They’ve has been great in terms of publicity, with ads in the guitar magazines every month. It’s been a very good relationship.”