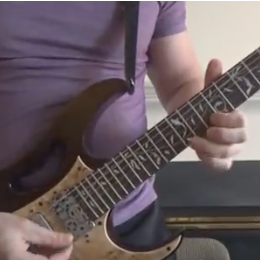 Shredding and the Phrygian mode

Shredding and the Phrygian mode. A tasty neo-classical run

If you type “Shredding” as a Google search, two definitions for this verb will appear at the top of your screen. 1. To tear or cut into shreds. 2. To play a very fast intricate style of rock lead guitar.

If you’re a guitar player, definition is all that matters. Shredding is the holy grail of rock n roll leads. Guitar giants from Jimmy Page and Richie Blackmore to Van Halen and Steve Vai solidified their legendary status by playing impressive leads with seeming effortlessness. With blazing fast speed and near perfect accuracy these shredders utilized techniques such as hammer-on pull-offs, fast picking, sweep picking, legato runs, tapping, and well controlled tremolo dive bombs. But the technique they employed that perhaps best defined the shredding idiom was neoclassical runs. Indeed Swedish guitar maestro Yngwie Malmsteen rose to prominence in the 1980s playing neoclassical metal. Say what you will of his music, you’d be hard pressed to find any list of “The fastest guitarists of all time” or “The best shredders of all time” that does not include the Godfather of shredding.

Neoclassical runs are based off the same motifs used by actual classical music drawing mostly from the late 17th and early 18th century. Ah, the 1700’s- when women wore corsets, men wore wigs, opium was in fashion, and Romantic and Baroque music topped the charts. Rock stars of the day included Bach, Vivaldi, Handel, and the original shred master himself Niccolo Paganini whose virtuosity on the violin inspired the myth he had sold his soul to the devil in exchange for his prowess one hundred years before anyone had heard of Robert Johnson.

So what makes a tasty neoclassical run?

More often than not it’s a mode played fast- nothing more. Baroque music was almost entirely based on modes. It was very mathematical- probably because composers were writing melodies on paper, before they were ever played or heard. Thusly these melodies were conceptualized based on how notes corresponded with each other- as opposed to what most of us do: sitting down with the guitar and a bottle of anything to jam and seeing what sounds good.   However even if this is how you write music- it’s certainly how I write mine- you are still using modes!

My friend and bass player extraordinaire Richard Berman once in the studio deduced that the song I had written, without any knowledge of the mode itself, was in Mixolydian. This was one of those rare songs for which I had not written the solo in advance. And because of that, when it came time to shred, Richard had some very good suggestions as to what notes I should and shouldn’t be hitting. To that end, having a knowledge of modes will allow you to conceptualize your solos even when you aren’t playing.

Some of my best solos have been written in my head while driving in my car or pretending to pay attention at work. This is also an excellent way to improve as you can create solos that are above your level and then endeavour to learn them knowing once you do they are going to work perfectly over the music, not to mention melt faces.

Modes are simply scales and these include the major scale, the Dorian mode, the Lydian mode, the Mixolydian mode, the Phrygian mode, and the natural minor scale. They are all worth learning to have more weapons in your shredding arsenal. And the great thing about scales is once you can play them, because of muscle memory; you will be able to blaze through them without thinking. Eventually it may become harder for you to play these memorized scales slowly then it is to shred them fast.

This mode consists of root, minor second, minor third, perfect fourth, perfect fifth, minor sixth, minor seventh, and octave. Or, if you’re starting on E (and you want it in plain English) – E F G A B C D E.

I use this run in the instrumental break down in “Murder Town.” I start on the high E and descend in the Phrygian mode all the way down to the low E (where I dive bomb with the tremolo because…dive bombs are cool).

Listen to the run in “Murder Town” starting at 2:01. Then watch the instructional video and learn to play it yourself. This deceptively hard sounding lick will not only impress but will firmly place the Phrygian mode in your shredding arsenal.

Cheers and keep those fingers moving!