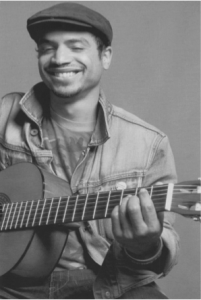 Great guitar riffs have that magical something that reaches out, grabs you by the scruff of the neck, and pulls you all in. From Kashmir to Thrift Shop, a successful riff captures the ear and captivates the imagination.

During the first instalment of this riff-writing series, we examined the three golden rules for writing classic rock riffs: First, choose a rhythm. Second, choose a scale. Third, noodle until the magic appears. In this lesson, we’ll add power chords to beef up our guitar riffs!

Although this lesson is targeted at beginners, guitarists at every level can employ these simple devices to craft their own signature riffs. So grab your guitar and prepare to rock!

Power Up with Power Chords

Perhaps no other chord captures the strength and the fury of classic rock guitar like the power chord. Consisting of just two notes (the first and the fifth scale degrees of any major scale), power chords are big and loud, and they squeal like a jet engine just before takeoff! And best of all, they’re accessible to even the greenest beginner because they are so dang easy to play.

‘Power chords … squeal like a jet engine just before takeoff! And best of all, they’re accessible to even the greenest beginner’.

Let’s begin by constructing a few open-position power chords: E5, A5, and D5. In the examples below, the highlighted yellow notes specify the notes contained within each power chord.

As you can see, power chords consist of the first and fifth degrees of any major scale, which is why the number five often follows a power chord (e.g. E5, A5, and D5).

On the guitar, these chords lay out as follows in the open position:

If you’re completely new to playing guitar, then spend a few minutes working through the following examples with a backing track.

Sometimes, it’s not the notes you play, but the notes you don’t play that transform a simple exercise into an insatiable groove. Check out the following exercise for an example of sound and silence:

Notice the doubled root above the fifth scale degree. This beefs up the sound of the power chord, and it’s especially useful when arpeggiating power chords.

If you harmonize those notes using power chords, you’re left with the following set of chords:

This brings you back full circle to where you began. At the end of the first instalment, you learned the riff in figure #6 entirely from a pre-planned rhythm:

… and the E minor pentatonic scale.

Notice the power chords in measures five and eight. If you analyse these chords, you’ll discover they function as the bIII and IV degrees of the E minor pentatonic scale.

In the example above, power chords are used in the same way an exclamation point would be at the end of a sentence. In other words, they add energy and excitement to the musical statement.

‘Power chords [can be] used in the same way an exclamation point would be at the end of a sentence … [adding] energy and excitement to the musical statement.’

Your assignment: Compose an eight-bar B section to this AABA tune. Recall the three golden rules: choose a rhythm, choose a scale, and noodle until the magic appears. All of that means you’re limited to the E minor pentatonic scale harmonized in power chords (i.e. E5, G5, A5, B5, and D5) and the following rhythms (because once again, the cards have spoken!): 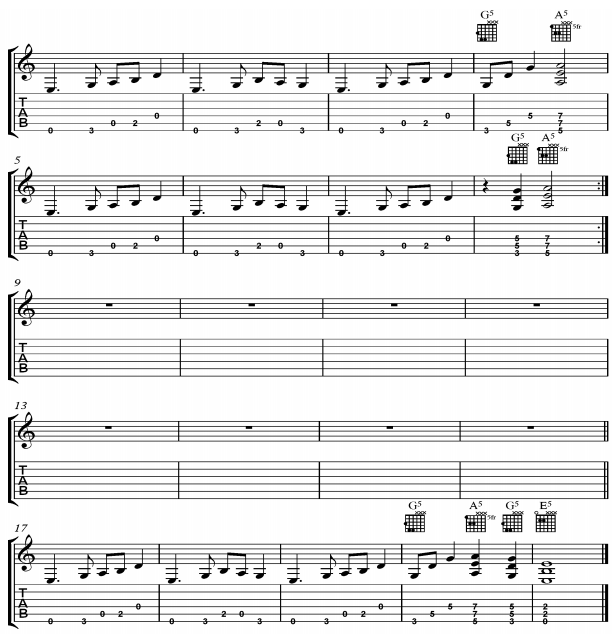 So what did you come up with? If you’re interested in sharing the riff you created over the B section of this tune, please feel free to email me at: [email protected]

Brian Parham is Oregon’s most inspired guitar instructor for kids. He is the author of The Ultimate Rock Guitar Dojo for Kids: a fun and innovative method for teaching kids to play rock guitar. Students of the dojo progress through five levels of skill and achievement represented by the white, yellow, green, red, and black guitar straps.