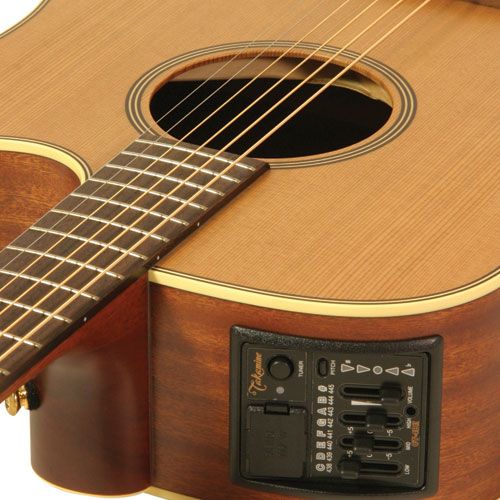 Now that you have a grasp of the fundamentals of the acoustic guitar, you can begin to indulge and treat yourself!

So, let’s look at a few key factors, such as style, price, and features.

Style – by this I mean body size.

There are tons. Most of what you see is the ‘dreadnaught’. This is the most common size, and likely be good reason. I have to be honest and tell you know I don’t know why… but all five of my acoustics are dreadnaught. Being a big guitar, they project well. Isn’t that what you want an acoustic for?

Built in tuner and plug in amplifier thingy – the tuner is awesome, as long as you promise me you know how to tune manually, with no devices. As long as that is the case, the built in tuners are incredibly handy. Pretty much, the very act of playing a guitar knocks it out of tune. At least it does to me. I was raised learning equal parts of Hendrix and Metallica, though. So, I am not much of a pretty pickin’ John Denver type.

Also cool and useful, is the pre-amp electronics that allow you to plug your acoustic in.

You won’t use this nearly as much as might think. So, factor that into your costs and benefits.  What I mean specifically is that hardware probably costs about $100 per guitar. So, if you see a $300 guitar with that built in… you are really just getting a $200 guitar and a feature you will barely use.

Where do you go?

I want SO badly to tell you to support local business. I want to tell you to find a mom and pop store to support… where each guitar sold means they make rent.  However, the reality of this isn’t practical. The big barn chain stores have way better selection, and better pricing.

Here is a specific, this is my most recent acoustic purchase. I LOVE this guitar. It is my alpha go to guitar. It is too loved to go camping. I found a local retailer who was a Takamine distributor, and he said he could order it for me for $1100. Guitar center had it for $799. It’s just that simple, sometimes. I still support the local shop. I get my strings and picks and cables there. They are small enough, and kind enough, to order the kind of strings I like… but for big purchases (anything over $100) you will do well with the big box stores. Like wal mart, they order guitars by the thousands, and so get better pricing they can pass on to you. 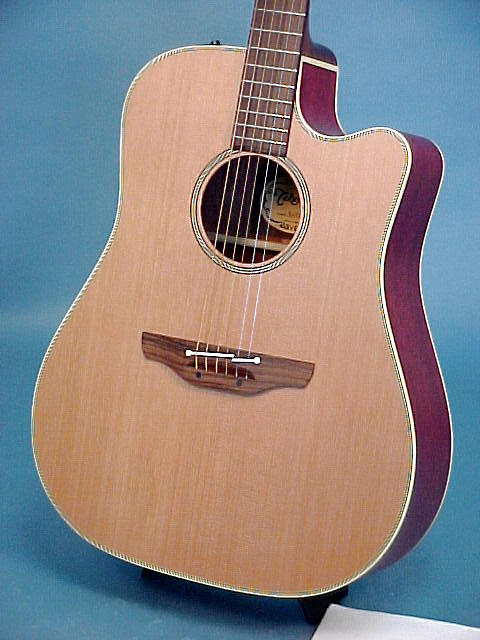 Since this is your second guitar, you have a pretty good idea of your playing style and influences. Sound and comfort are everything. Yes, comfort. Does it fit nice on your lap? I spent an hour a day with an acoustic on my lap. After 25 years of playing, comfort gets important. This is why a flying V is almost always a bad idea. Also, a 12 string is a bad idea. You can get that for your 6th guitar. They look and sound beautiful, but you will almost never use it.

Action – How tough is the acoustic to play?

Specifically, I mean how tough is it to mash down the strings so they don’t buzz? Generally speaking, cheaper guitars have a higher action. High action SUCKS. On your first guitar, it is great. It is tougher to play, which makes you a tougher guitarist. However, if you don’t have a guitar that plays like a dream, you won’t pick it up as often as you should. Note that electric guitars can have the action adjusted easily. Not with acoustics. It is pretty much going to be that way forever.

So, play a ton of guitars.

Play guitars WAY out of your price range. See those Taylors and Guilds that are $4,000 grand each? What makes them worth $4,000? I have found it isn’t sound, necessarily. It is details like craftsmanship, materials used, where it was made… etc etc. It isn’t sound, though. For your first acoustic, you can get a really great well made and sharp looking acoustic for around $100. For your second, shoot higher. I can’t tell you your budget, but mine was $350. I still have that guitar. But, I still have nearly all my guitars. It is an awesome addiction. After 25 years, I have 15 guitars of every type (a 12 string acoustic, a several dreadnaughts, 2 bass guitars, 3 electric guitars, 2 ukuleles… etc etc).

You are going to hear a ton about ‘solid top, arch top, and all kinds of wood types. Don’t sweat that, yet. Just go for something that sounds great. If you can, play the guitar in a different environment than where you are. Example – last month I went into GC’s tiny expensive acoustic room, just off the floor from the main room. I picked up a Taylor that was 2 grand and played the intro to ‘Paradise City’ and I was amazed. I immediately began calculating how I could get 2 grand together. I had to have that guitar. It was a moment that literally sent chills. I took it out to the main acoustic room. It was just ok, at best. That tiny acoustic room resonates so beautifully everything sounded nice. But, that is a trick for those very high end guitars. It won’t sound like that in your living room.

This is the design where the bottom of the guitar joins the fret board is cut away so you can get at the higher frets. I use this way more than I thought I would. I am 95% an rhythm player. By that, I mean I don’t really solo. My joy comes from sitting by the campfire and entertaining the fellow drunks camping. Never underestimate this skill set.  It works! People admire you, chicks dig you, you get invited to more stuff, and campers are not a discriminate bunch. I play a range of early Dylan to early Metallica and they all drink it up every time.  Example – next week I am invited to go camping with my buddy who has a speed boat and jet skis.

Why? Because I have become a campfire legend. Keep practicing, and you will be, too!