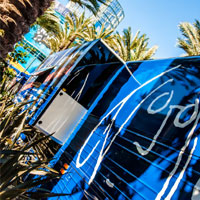 Following the news that Art Alexakis (singer and guitarist with Everclear) along with some students, would be writing, playing, recording and videoing a new original song within a day, with The Lennon Educational Tour Bus at the centre of the action, we climbed aboard to find out what the bus was all about.

Essentially, this massive bus is an audio and video recording studio on wheels, manned by 3 time full engineers who live on board as it travels around the country “committed to reaching youth through music and video” with the bus having all the modern, first class equipment facilities to achieve exactly what Art did at NAM…and all aboard the impressive bus.

This is a non-profit organisation that organises its schedule from requests as they are received from schools, universities, clubs, music trade shows and the like all over America to further the music education of the country reach (and doubtless influence) thousands of people every year. The 3 engineers are amazingly committed, being aboard for 5 years yet still as enthusiastic and committed as when they first joined.

Inside, the bus has an audio and video production room, a recording and mixing studio, living quarters and can be opened up to make one large studio available. Sponsors such as Apple, Sony and Roland also supply the equipment required to make the bus fully functional and be able to achieve what it sets out to do. There is now a second bus that tours Europe, so, keep an eye out for it at a location near you.

Top recording artists like The Black-Eyed Peas have used it to record and mix whilst they are on the road and Justin Timberlake has had involvement in promoting the programme.

Art Alexakis recorded and videoed the original song with 5 LACM students, following the announcement that he will be the new Songwriting Program Chair at the Los Angeles College of Music.

Anyway, enough writing, the video aboard The Lennon Bus will provide you with the perfect insight.

Art Alexakis, the newly appointed chair of the songwriting program at music school LACM (Los Angeles College of Music), inspires students in pursuit of a music degree in the Lennon Bus Songwriting Competition at NAMM 2014. 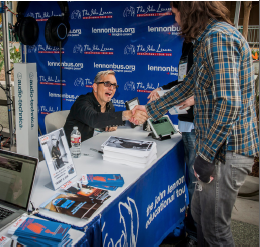 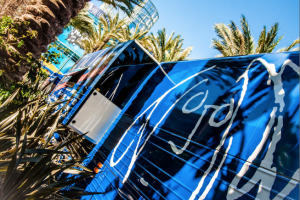