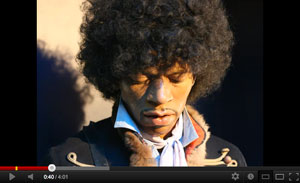 Top 10 Covers: that are (debatably) better than the original!

Me First and The Gimme Gimmes – Hello

http://www.youtube.com/watch?v=oI0d-kOxb4A
Starting this list we have an explosive punk cover of “Hello” by Lionel Richie. Me First and The Gimme Gimmes are a punk cover superband with members from NOFX, Lagwagon and Foo Fighters, and approach the track with the same tongue in cheek ferocity that has earned them a huge cult following. The guitar solo that comes out of nowhere and three part harmonies at the end deserve special mentions.

The Specials – A Message To You, Rudy

http://www.youtube.com/watch?v=cntvEDbagAw
The Specials debut album opened with this cover of Dandy Livingstone’s rocksteady hit, and the single went straight into the UK top ten. The heavy influence of ska and reggae on the British punk scene was highlighted by the two tone movement and The Specials led the way with direct covers of reggae bands such as Toots and the Maytals and Prince Buster also featuring on the same album. “A Message To You, Rudy” was the most prolific and is undoubtably more well known than the original.

http://www.youtube.com/watch?v=SmVAWKfJ4Go
Trent Reznor’s song “Hurt” is widely believed to be about self harm and society, but in 2005 the Nine Inch Nails track was propelled to new heights as it was covered by the legendary Johnny Cash. The cover was chosen by producer Rick Rubin who contributed massively to song choices on the whole of the American IV: The Man Comes Around album. The track, which was one of the final releases before Cash died in 2003, received huge critical acclaim and is now seen as one of his best recordings. Trent Reznor himself, although at first wary of the idea of Johnny Cash covering the song, described himself as “deeply moved” when he first heard it.

http://www.youtube.com/watch?v=tVN_h7zO54k
Jack White is famous for his blues and soul influences, with his other projects such as The Raconteurs and The Dead Weather bringing dirty delta blues back to the forefront of the music scene. However, The White Stripes are also well known for their country, soul and blues influence. Their cover of Dolly Parton’s “Jolene”, which is regularly played in their live sets, almost made it onto this list. However the Burt Bacharach/Dusty Springfield classic “I Just Don’t Know What To Do With Myself” holds it’s own on a great album that includes the classic “Seven Nation Army”.

Children Of Bodom – Oops I Did It Again

http://www.youtube.com/watch?v=WGtXlBbWeB4
Children Of Bodom are a finnish death metal band. Covering Britney Spears. I think these two sentences are more than enough to allow them a place in this list.

The Beatles – Twist and Shout

http://www.youtube.com/watch?v=tgd46QiHz4I
“Twist and Shout” was originally a release for R&B band the Top Notes, but the production of the song by Phil Spector was despised by the song’s writer Bert Berns. As way of revenge, Berns produced the second version by the Isley Brothers. Only a year later The Beatles recorded their version for their UK debut album Please, Please Me. Their version made it into the US single charts twice, both in 1964 and 1986, off the back of the film Ferris Bueller’s Day Off. Surprisingly this makes it the longest running US Top 40 hit for The Beatles with a total of 23 weeks. John Lennon’s voice deserves a special mention as one of the finest early rock vocal performances.

http://www.youtube.com/watch?v=CDl9ZMfj6aE
In 2001 Alien Ant Farm burst onto the scene with their cover of the Michael Jackson classic “Smooth Criminal”. They quickly left the scene again after failing to make their second album gain any attention, but they left us with this explosive pop punk cover. The driving guitars, finger tapped solo and intermittent Jacksonesque shouts, this track is definitely a legacy they can be proud of. Even if there’s nothing else. And there isn’t.

http://www.youtube.com/watch?v=KOEZMjuoIEY
“Feeling Good”, originally made famous by Nina Simone, was covered by Muse in 2001. The neo-prog band made the song their own using their classical music influences to form the track into a masterpiece. Now probably played more often than any other version on the song in film, TV and on radio, a true testament to how a cover version can be done just right.

Nirvana – Where Did You Sleep Last Night

http://www.youtube.com/watch?v=mcXYz0gtJeM
In 1993 Nirvana visited MTV’s studio to record an unplugged episode with all their well known hits. However they ended the set with an American Folk song called “In The Pines”. Rebranded as “Where Did You Sleep Last Night”, the track is possibly the single most amazing vocal performance Kurt Cobain ever gave. Recorded just five months before he died, it is seen by many as his final performance, with the screamed final verse sending shivers down the spines of the most hardened rockers to this day.

Jimi Hendrix – All Along The Watchtower

http://www.youtube.com/watch?v=4AuxJH2Mj30
We considered not including this song as it’s so common on “greatest covers” lists. However, when the original artist admits its better than their own and changes the way they play the song from that day onwards, it’s hard to ignore it. It’s also hard to forget exactly what Hendrix did with the song, as its so well known now. He took the original, rehashed it, changed the way it was sung, added ridiculous guitar solos and then shoved what was left through a psychedelic wormhole. What comes out the other side is a different song and a brave interpretation for a fan so enamoured with Dylan, he used to keep one of his guitar songbooks in his gig bag at all times.