Garageband: App Of The Month

Now I don’t think that the inclusion of this app is a surprise to anyone, and it may even be an app that you have used in the past.

But I certainly think that it is important enough in the iOS environment to deserve a mention, and a quick scan over some of the features you may not be aware of.

In basic terms, GarageBand is a DAW (or digital audio workstation), a program for recording live audio and MIDI data into a program for mixing, but the latest update for GarageBand is a multitude of products rolled into one, but for the purpose of this review I will try and place emphasis on the guitar-specific features.

Firstly, as stated above, GarageBand is multi-track recording software which will allow you to record you guitar playing to create songs, which is not only beneficial for song writing, but also tracking your process as you learn guitar. The quality of the audio input is surprisingly high and the depth into which you can edit your audio is pleasing to say the least.

Now not all of us have the opportunity to play with a band, or indeed the time. GarageBand has a fantastic feature that is aptly named ‘Magic GarageBand’. This feature allows you to pick from a multitude of instruments and place them within an XY axis of volume and complexity, which edits the volume and complexity (obviously) of the samples selected. This can allow you to create a backing track for your audio in a matter of seconds. Great for when an idea comes to you quickly and you want something to back it up to give you an idea of what the finished article could sound like, and has high enough quality audio samples to actually be the finished article if you so wanted. It then has the Smart Guitar feature, which allows you to pick from the following styles of guitar (Acoustic, Classic Clean, Hard Rock or Roots Rock guitar), which are all loosely emulated versions of everyone’s favourite guitar tones.

This feature is actually very cool. Using the iPad’s touch screen you can play the notes of your chosen chord vertically, ensuring that you’re always in tune. This can also be recorded into the multi-track recording section of the App, meaning you can layer up your parts and really get your track sounding the way you want it. The Guitar Amp is probably the most interesting addition the GarageBand app.

It’s a truly brilliant idea. 20+ guitar amp emulations in the palm of your hand. You will require hardware like the Amplitube iRig or Alesis iO Dock to take advantage of this, but when connected the sound possibilities are endless. There is no other way you could even comprehend having an amp collection like this in your house, and the emulations really are of very good quality for what they are, and each with dedicated controls to get your sound just right.

You even have an output using both of these devices, so if you really did want to, you could use these amps as an input into different recording software. Not strictly necessary, but very handy if you wanted to take your recordings to the next level in terms of audio quality. Along with these features, the GarageBand App also comes with a chromatic guitar tuner, which is always handy and means that you don’t have to leave the app to go to another tuning app that you may have installed. Not a great tuner, but not a bad one either. It does the job!

A nice little touch within the app, is that once a mixdown of the track is complete, you can share it amongst your friends on a multitude of social media platforms. So you can show your friends how much you’re improving and rub your abilities in their face a little. Again, not a completely necessary feature, but a nice touch nonetheless.

The last feature I am going to look at in GarageBand (though there are many more I could go over) is the Jam Session feature. Brilliant idea. It is a little bit of a shame that it works over Bluetooth instead of wi-fi, but a step in the right direction for sure. The Jam Session feature lets you jam with someone using the app via Bluetooth, meaning that you can be playing and recording separate instruments and work on arrangements of songs together, and the beauty of it is that you can have up to four people in the session at any one time.

Overall this app has come on leaps and bounds since its first version, and at present it really is ahead of the curve in terms of iPad recording. Combined with the iRig or iO Dock you also have a piece of recording software that will do you nothing but favours, and the flow of the app is splendid. For $4.99 I can’t really see where you can go wrong on this one! 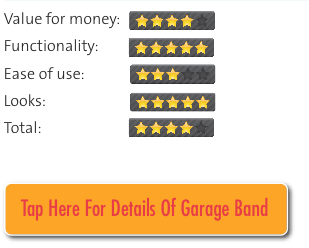