Chord Of The Month: D9

It’s strage isn’t it? A few days ago we were thinking what weird, perhaps complex, unusual chord should feature for this month.

Should it have a long name? Should you have to use 4 fingers and a thumb to be able play it? Could we find one that had featured in some far out wacky seventies progressive rock album?

Well – no. Because this issue of Guitar Coach is focusing on the blues our minds turned immediately towards a 9th chord. D9 in fact. Mainly because the key of D is one of the easier blues keys to master and therefore quite common for those of us who are starting out on our guitar journey. It also has an interesting shape when played in the open position.

We will not be going into the theory aspect of 9ths, but we will be more than happy to answer any questions if you want to use the FAQ section of the magazine.

9th chords are known as extended chords (as are 6ths, 11ths and 13ths) and are commonly used throughout the funk, jazz and blues genres. Although we are concentrating on D9, the inversions of the chord can be applied to all 9th chords by moving the chord shape up and down the fretboard by understanding where the root note is fretted.

The 9th shape that we will focus our efforts on is shown below: The notes that make up the chord are:
A string – D
D string – F#
G string – C
B string – E
Top E string – A 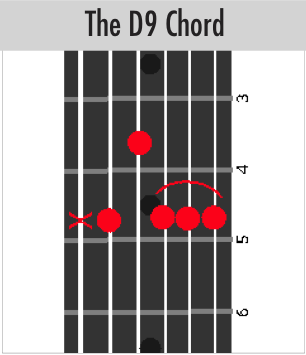 When played using this shape, the root note is always on the A string – in this case the D (root note) is on the 5th fret. You can therefore move this shape anywhere on the fretboard to form other 9ths.

When the chord is played this way it exudes a mellow blues sound and is commonly used at the end of a phrase within a song by sliding down from the fret above. For example, the 6th fret (Eb9) to the D9 chord.

To illustrate this, we have used the D9 chord in one of the riffs in this month’s issue. You can see this illustrated and watch, listen and learn the intro to Sugar Mama by Nine Below.
Similarly, many a song has been known to end using this sequence. The Doors’ Roadhouse Blues uses the F9 to E9 slide down to finish off their masterpiece and it is a great way to end a song that has been bursting with energy throughout. The slide down brings an apt calmness and finality to proceedings without cutting off everything with an immediate stop. Whoever first thought of this is a genius.

If you are playing a standard 12 bar in the key of D usng the major chords D…A…G try substituting these majors for 9ths and you will achieve a totally different feel that is less edgy and feels more rounded and moody. Especially if you slow the tempo down.

The other great sound you can achieve with this shape can be achieved by plucking the A string, followed by the D, G and B strings and then returning back to the A string in reverse order. Andy teaches this as an aside after The Nine Below Zero riff lesson – so have a listen and you will see exactly what we mean.

Of course, as mentioned earlier in this article, other genres of music also make use of the 9th chord played in the position of the 1st chord diagram. To “get to know” your D9 chord it is important to use it in context with other chords. Examples you may like to check out are Shining Start by Earth Wind and Fire (C9, D9 and E9), Wheels by The Foo Fighters (D9, A, F#M, E) and last but not least, James Joseph Brown’s classic, Living in America (Bm, Am7 and D9).

Image below taken from the Guitar Toolkit App 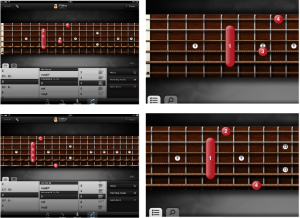