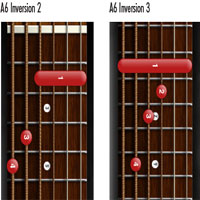 Right then……we don’t usually dive into too much theory, but we should explain what a 6th chord is, why it is called a 6th and as usual, provide some example songs that use these chords. Much the same as usual then, but with a tad more theory. If this is what you would like in the future, please don’t be afraid to e mail us and we will do our best to oblige. So let’s crack on.

For our example, we will use A6, with the “simplest” position (open) played as shown in the chord diagram opposite.

The way to play the chord shown is to use your fore finger as a bar and simultaneously fret the D, G ,B and top E strings just using this finger. Make the most of this because the other inversions are much trickier to master.

Well, you did ask – a sixth chord is any triad with an added sixth above the root.

In layman’s terms, a chord is three or more musical notes played at the same time, with the triad being this group of 3.

As far as Amajor is concerned, this group of three notes is A (The root note) E and C# i.e. the 3 notes that make up this chord.

As a result, you can play different inversions of A6 up and down the neck using the notes of the chords as described above, or, alternatively, use different patterns of the basic shape as shown below. 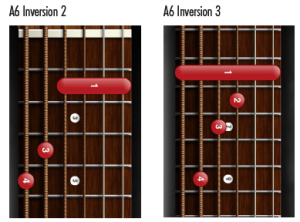 Using these shape will allow you to pick different strings to obtain a different feel, many of these being used in many a jazz compilation.

The same principle can be used when working out any 6th chord, although, as we said at the beginning of the article. A6 is probably the easiest to master.

Some Songs to Listen to with A6

To help you get a feel of how A6 is used, here are the chord sequences within some famous songs:
Pyramid Song (Radiohead) – F#…Gmaj7…A6…Gmaj7…G

You can hear that it is a very warm and unobtrusive sounding chord that adds colour and feel to a song or chord sequence, as well as sounding more complex to play due to its jazzy overtones – well in the first position anyway. Not total rock ‘n roll, but close enough!!!!!

Enjoy your experimentation and let us know how you get on.